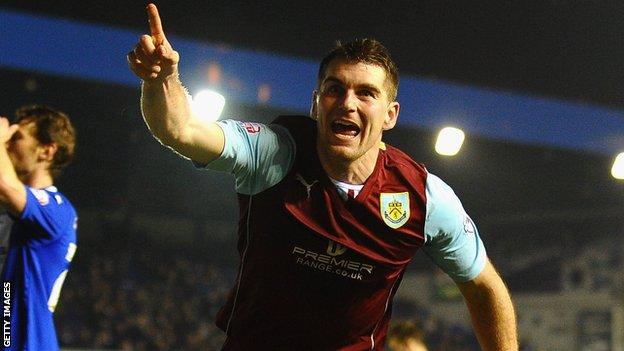 Burnley striker Sam Vokes is set for a lengthy spell out after scans showed he ruptured his anterior cruciate ligament in Saturday's loss against Leicester.

The 24-year-old, whose 20 league goals this season have helped the Clarets to second in the Championship, will see a specialist later this week.

"I am sure you will join us all in supporting him during his recovery," boss Sean Dyche told the club website.

Strike partner Danny Ings (ankle) is in line to return to action soon.

Championship Player of the Year Ings, 21, has scored 25 goals this season and his partnership with Vokes has been key for Dyche's side.

But injuries to both Ings and Vokes, who signed a new Burnley contract in January, have left Dyche with Ashley Barnes as his only fit senior striker.

Burnley have yet to give an indication of when Vokes may be fit to make a comeback, but it is unlikely to be before next season.

"As ever, our team mentality remains focused and this represents another opportunity for someone to come and make a continued contribution in the closing weeks of the season," Dyche added.

Despite the 2-0 loss to leaders Leicester at Turf Moor, Burnley remain in the automatic promotion places, nine points ahead of third-placed Queens Park Rangers.