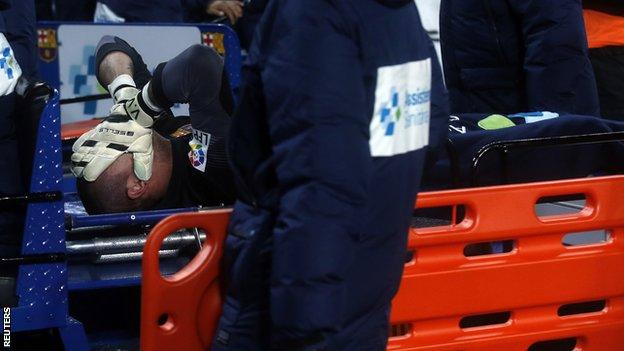 Spain and Barcelona goalkeeper Victor Valdes will be out for seven months after undergoing successful knee surgery.

Valdes had surgery in Germany on Monday, with Barcelona confirming he would be out until at least October.

He is leaving the Catalan club when his contract ends this summer.

"The knee's internal cartilage has been sewn up and the operation was concluded successfully," read a Barcelona statement

Valdes, who announced his intention to leave Barcelona last summer, has made 535 appearances since making his debut over a decade ago.

He has won six La Liga titles, three Champions League crowns and two Copa del Reys in his time at the club.

Valdes was also part of the Spain squad that won the 2010 World Cup and 2012 European Championships.

His absence means Iker Casillas of Real Madrid and Napoli's Pepe Reina will likely compete for the number one spot at the World Cup in Brazil.

Manchester United's David De Gea is also in contention for the squad.