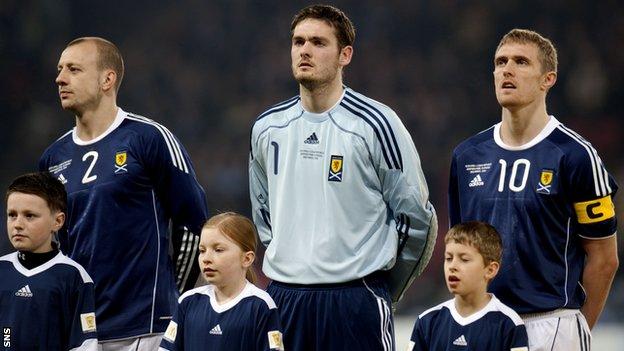 Former Hearts and Sunderland goalkeeper Craig Gordon aims to be playing again next season - and believes he can return to the Scotland squad.

The 31-year-old has not featured in a competitive game for almost two years because of an unusual knee injury.

Interest has been quite high, which is nice after a lengthy lay-off

"I want to add to my 40 Scotland caps," Gordon told BBC Scotland. "That has been what's driving me."

Gordon's five-year spell at Sunderland - from 2007 to 2012 - was plagued by ill-fortune, including two broken arms.

"I had a few injury problems, that's no secret," he said on Sportscene. "My latest problem was with my patella tendon, which has taken a couple of operations and quite a few injections.

"But now I'm able to do all of the things I could do before.

"I've been back training for the last three months and everything has been going well, so I'm hoping to get a club in the near future."

Gordon, who made his first-team debut for Hearts in 2002, has been talking to potential employers, saying the interested parties are "of a good standard".

"Interest has been quite high, which is nice after a lengthy lay-off," he added.

"Realistically, looking to next season is probably my best chance. I want to be playing at the highest level. I want to go and win things.

"Playing for Scotland was probably the time I enjoyed most in my career. I want to try and reclaim the number one jersey - that's my aim."

Gordon, who cost Sunderland £9m, last played for Scotland in November 2010 and had a brief spell coaching with Dumbarton during his rehabilitation.