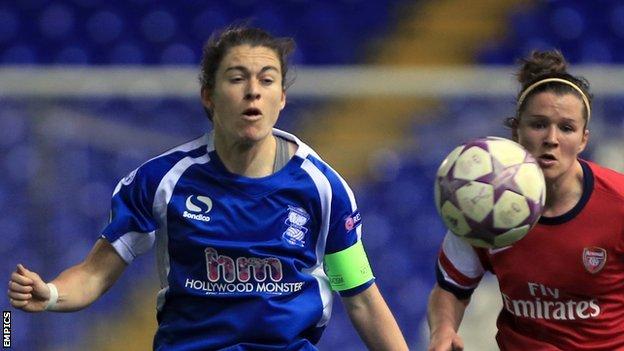 Kirsty Linnett and Remi Allen scored in a 2-0 quarter-final second-leg win at Arsenal on Sunday, completing a 3-0 aggregate victory for a team widely tipped as relegation candidates.

"It's special, but we haven't won anything yet," Carney told BBC WM.

"There are still people to prove wrong and things to achieve for this club."

Carney added: "It's a massive moment, we've made history for the club and we have done very well - but for me, I like to win things.

"It [beating Arsenal] shows what this squad can do, our capabilities, after everyone has been writing us off in pre-season and saying that we are relegation favourites.

"We've come here, scored three goals over the two legs, conceded nothing, and they have two World Cup winners, Kelly Smith, Rachel Yankey, and it's our youngsters that have done the job.

"This is just the beginning for us."

Carney said City have embraced their tag as favourites for relegation from the Women's Super League this coming season, which kicks off on 16 April.

With Birmingham facing a semi-final against Swedish side Tyreso, who beat Austria's Neulengbach 8-1 on aggregate in their quarter-final, she feels that attitude will serve them well in Europe.

"We are under no pressure, and are underdogs wherever we go, because that is how people perceive Birmingham City - and we like that," she said.

Birmingham are next in action when they face Doncaster Belles in the FA Women's Cup fifth round on 13 April.

Carney said: "Before the next Champions League game, we have got the FA Cup and we have to be diligent and respectful of the opposition.

"Then obviously in the league we have people writing us off as relegation favourites.

"We will be fully prepared for the Champions League, but we can't take our eye off what comes before that."