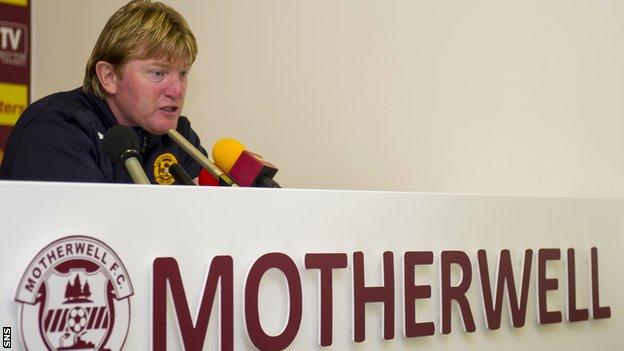 Stuart McCall insists he is not concerned that only three of his Motherwell team's 18 wins this season have come against sides in the top six.

The Scottish Premiership splits into two after this weekend, with Well sitting third ahead of Tuesday's visit to the Caledonian Stadium in Inverness.

Asked what his side have to do to take more post-split points, the Well manager said: "Just play a little better against the better sides.

"We won't worry about that."

Motherwell have been praised for being in their present league position considering the size and wage budget of their squad compared to their rivals for a Europa League qualifying spot.

But they suffered a surprise 2-1 defeat at home to relegation-threatened Kilmarnock on Saturday, leaving McCall hoping for the club's injury worries to ease.

"We had a chat on Sunday and the lads are positive," said the Well manager.

"I just hope, come the split after Saturday's game, we've then got a break of two weeks, we can have some bodies back and be a little bit stronger and go into the final five games really pushing for it."

McCall is urging his side not to have any post-season regrets.

"So it's now time to put the foot down on the gas and not think we're tired. We've really got to put everything into this thing.

"It might be in six weeks time we're lying wherever we're lying and we think, 'you know what, it was a cold, damp, bobbly pitch night up at Inverness that got us to where we want to be', so that's how we have to approach it."

Motherwell are two points behind second-top Aberdeen but three ahead of Dundee United and eight clear of Inverness Caledonian Thistle.

However, McCall is not ruling Tuesday's opponents out of the chase for European football.

"Once we get to the split then anyone can takes points off anyone," he said.

"All you need is a couple of wins or couple of defeats and I think it can change round and I'm sure both Inverness and Dundee United, when you listen to the staff and management speak, have got eyes above them.

"Inverness will still be looking to catch us, as will Dundee United, but we've got to be really focused and positive and look to be coming down the road back in second place."