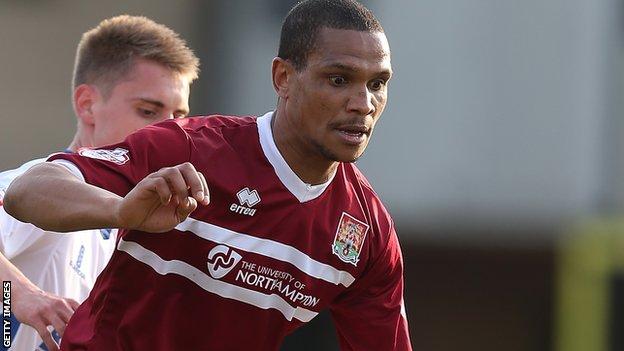 Northampton Town defender Mathias Doumbé says a lack of 'fighting spirit' cost them against Bury, and they must now pick themselves up.

The Cobblers remain in the bottom two in League Two after the 3-0 defeat at Sixfields, three points from safety.

Doumbé told BBC Radio Northampton: "The manager wants a reaction from us. He will get it. We weren't good enough.

"We didn't show enough urgency or fighting spirit. They had two chances and they scored from those two."

He added: "After everything we've achieved since the manager has been at the club, I'm really positive we can get the big results we need."

The Cobblers started life under Chris Wilder with four wins and four draws from 10 matches, but have subsequently not won in four.

With six matches remaining, they play fellow strugglers Wycombe Wanderers and Portsmouth over Easter, and Wilder's former club Oxford on the last day of the season.

"If we want to stay in the league, we have to pick ourselves up," said Doumbé.

"I don't think pressure gets to the boys, but we didn't perform as we did in previous five games, and maybe we've been a bit unlucky not to get more wins and points.

"On Tuesday [against AFC Wimbledon], we were unfortunate not to win the game and maybe that's stayed in the minds of some of the boys.

"You're looking at a total of around 50 points, maybe less if you beat the teams around you, and then we'll see."