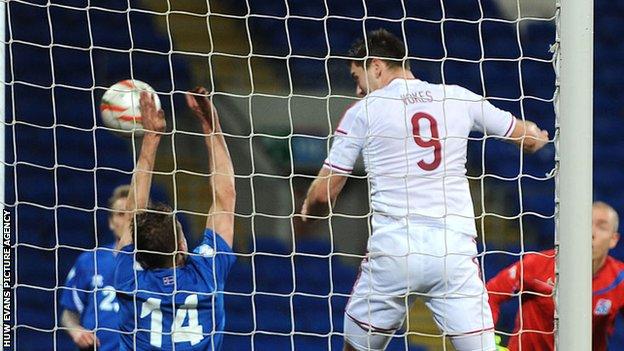 Wales coach Osian Roberts says he is "gutted" for Burnley striker Sam Vokes, who has suffered a serious knee injury.

It is feared he could be a doubt for September's opening Euro 2016 qualifier against Andorra.

"We're all gutted for Sam, he's been in a rich vein of form and full of confidence," said Roberts.

Vokes has scored six goals in 31 Wales appearances and was on target when Chris Coleman's team beat Iceland 3-1 in Cardiff on 5 March.

In an impressive season for Burnley, he has scored 20 league goals to help the Clarets into second place in the Championship.

Roberts, a key member of Coleman's coaching team, said: "With 10 qualifying matches you assume that you won't have Sam available for every game anyway. It gives us a reason for trying something different.

"We've got players who can slot into that position, like Simon Church for example.

"And we've got other attacking options where maybe we can do things a little bit differently and that may vary from game to game."

Vokes's injury was confirmed by a scan on Monday, and he will see a specialist later in the week.