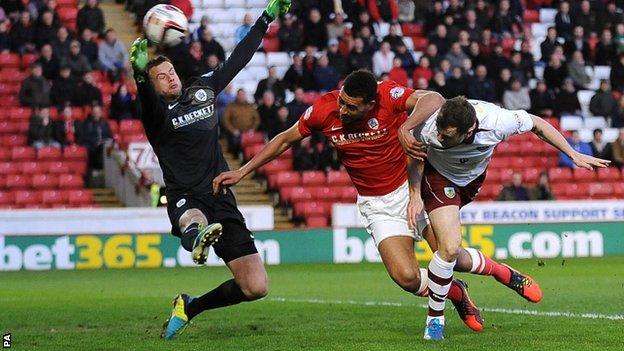 Burnley took another big step towards promotion to the Premier League with a win at relegation-threatened Barnsley to move them 11 points clear in second.

The Clarets could seal promotion with a win over Middlesbrough on Saturday, if Derby lose to Huddersfield.

At Oakwell, Ashley Barnes flicked Michael Kightly's cross into the net with his head for the opener.

He also had an offside goal ruled out as Burnley extended their unbeaten away run in the Championship to 10 games.

They have won five of those games to move within six points of already promoted Leicester - who were beaten at home by Brighton.

Barnsley, who had won two of their previous three games but failed to score in any of their last three home matches, are second from bottom with a five-point gap to safety.

The visitors, who welcomed top scorer Danny Ings back into the team after injury, started well and deservedly took the lead on just seven minutes with their first attack.

Kightly's near-post cross was met first by Barnes, who glanced his header into the top corner.

Barnes then had a goal ruled out for offside before Jacob Mellis and Dale Jennings shot over for Barnsley.

Scott Arfield had a shot blocked for Burnley after the break as the visitors stayed solid to secure another valuable win.

"We're disappointed, of course we are. Anything we could have taken off the team who are second would have been a real confidence booster for us.

"But we move on to Bolton on Saturday. There is still great belief. There's six games to go, 18 points to play for, which is a lot at this stage.

"We're still in with a chance, but it's down to ourselves. It's whether we believe or not that we can push it over the line and I certainly do."

"The next game for us is a big one. We've been focusing on it all season and that won't change.

"They're all tough games, so we'll be preparing for it.

"I've already told the players to enjoy tonight, but we're already prepping, recovering already and getting ready for the weekend.

"The outcome was the main part we were looking for - to come away from here with a 1-0 victory, a clean sheet and our keeper's not had a save to make."