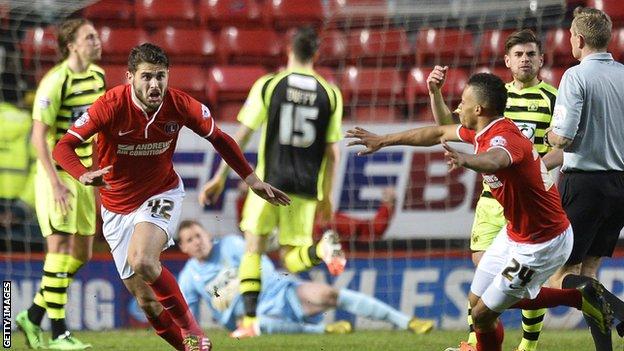 Charlton boosted their Championship survival hopes with victory over relegation rivals Yeovil at The Valley.

Astrit Ajdarevic fired in an early opener from outside the penalty area for Jose Riga's side but Joel Grant equalised quickly for the visitors.

Dorian Dervite headed Charlton back in front and Marvin Sordell added a third.

Kieffer Moore pulled one back for Yeovil, who remain bottom - while victory keeps the Addicks two points clear of the relegation zone.

Former Sweden Under-21 international Ajdarevic, on loan from Standard Liege, struck first when he collected a loose ball on the halfway line, beat one Yeovil challenge and fired past keeper Chris Dunn into the bottom corner.

Yeovil were level within two minutes, as James Hayter found Grant, whose shot was deflected in off defender Richard Wood.

Hayter then scuffed a chance from eight yards out, before Charlton's Iranian forward Reza Ghoochannejhad missed a good chance from close range.

Joe Ralls had two chances in as many minutes for Yeovil, fizzing a shot just over from 20 yards and forcing keeper Ben Hamer to stop his left-footed drive, before Tom Lawrence hit the bar direct from a corner.

At the other end Dunn made a superb save to tip a Sordell shot around the post before half-time but was helpless when defender Dervite powered home a 48th-minute header from Johnnie Jackson's corner.

Sordell then added a third, tapping in after Dunn failed to hold Ghoochannejhad's right-wing cross.

And although substitute Moore ensured a tense finish when he slotted into an empty net following a defensive mix-up, Charlton saw out the game to ensure victory.

"The result was the most important thing. The players showed they are not just strong technically and physically, but mentally as well.

"Now the other teams above us are concerned. Teams such as Birmingham and Blackpool are now in it and we still have two games in hand."

"The fat lady is not quite singing yet, but it's a poor result as far as our season is concerned because this was going to be a key game.

"I'm disappointed that we lost concentration at the start of both halves. We had some good chances, but so did they."