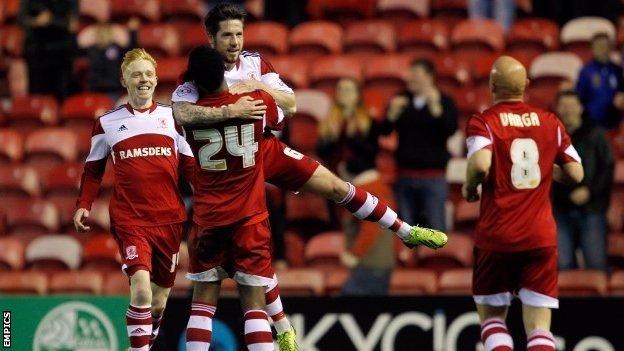 Birmingham lie only four points above the Championship relegation zone after defeat at nine-man Middlesbrough.

Danny Graham slotted home for the hosts before Jacob Butterfield doubled the lead from distance.

Emyr Huws's dipping shot from 35 yards got one back for Blues, before Boro pair Kenneth Omeruo and Ben Gibson were both sent off for second bookings.

But Lee Tomlin smashed home his first goal for Boro to seal the points.

A third successive win leaves the Teessiders eight points off the play-off places but, with only five games remaining, a top-six finish looks unlikely.

The deadlock was broken just before the half-hour mark when Grant Leadbitter's corner from the right was nodded down to Graham, who converted from inside the six-yard box

The Blues refused to lie down, though, and, after Manchester City loanee Huws had halved the deficit with a thunderbolt, Shinnie came close to equalising before the break from Callum Reilly's cross.

Randolph twice denied Graham after the restart as Aitor Karanka's side threatened to put the match to bed while, at the other end, Ibe - who came on as a second-half substitute for Shinnie - fired off target with a low drive.

Omeruo and Gibson were both shown second yellows for fouling Ibe and Nikola Zigic respectively.

But, despite Birmingham's two-man advantage, Tomlin capitalised on a defensive mix-up between Tom Thorpe and Paul Robinson to smash the ball into the back of the net.

"I prefer to think about the next game at Burnley as being one against a team near the top of the table and we have to go there to win the game.

"We have won the last three games and for this I am very happy."

Birmingham manager Lee Clark: "Our decision-making in the second half was astounding.

"It's starting to scare us, to be honest, in terms of the young players coming through.

"They need the mentality of how to win games. I think they'd rather do a trick or a flick rather than put the ball in the net."