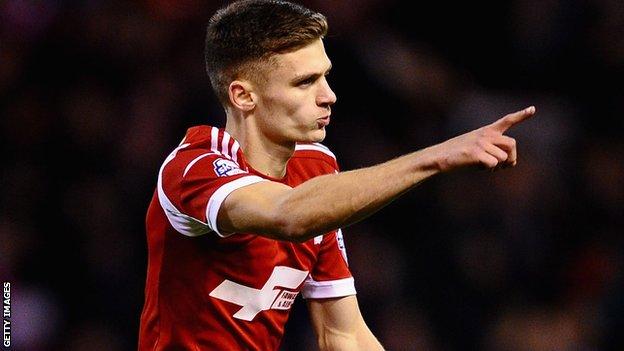 Jamie Paterson earned 10-man Nottingham Forest a point as they fought back from two down to draw with Sheffield Wednesday.

Chris Maguire scored from the penalty spot to put Wednesday ahead, but Forest equalised when Jamie Mackie headed in.

Lewis Buxton nodded in and then Joe Mattock gave Wednesday a two-goal advantage with a long-range finish.

Marcus Tudgay headed home and, though Forest had Danny Collins sent off, Paterson equalised late on.

Though it earned Forest a point it continues a poor run of form for the Reds, who have not won any of their previous 11 games in all competitions.

That has seen them drop away from the Championship play-off places to sit 10th, four points off the top six.

"I think we were worthy of the three points. We scored three good goals and I think we could have done something about all three of their goals.

"There were tired minds and legs. We had far too many players running with the ball instead of just passing and picking the 10 men off, but we went chasing another rather than just letting it happen.

"We probably needed just a little bit more experience on the pitch. After our third goal, we should have just managed the game and seen it out. In the end, though, we possibly could have lost the game."