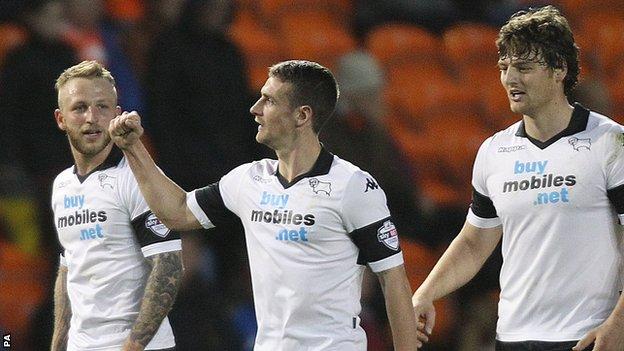 Derby climbed to third in the Championship by fighting back to win at Blackpool despite conceding a goal after 20 seconds.

Craig Bryson set up a second for Patrick Bamford and scored the third himself with a solo effort.

Blackpool, with two wins from their last 24 league matches, are three points above the relegation zone.

Steve McClaren's Derby side produced a slick performance at Bloomfield Road - with Scotland international Bryson at the heart of everything.

But they fell behind to Blackpool's first attack, when Goodwillie raced towards goal and curled in a powerful effort.

Derby's response was emphatic, as they caused havoc down the left flank - and they were soon 3-1 up.

They equalised in the third minute as Russell glided past Blackpool full-back Tony McMahon to set up Martin.

The visitors' crisp passing and movement soon opened the home defence again and on-loan Chelsea striker Bamford added a second when he tapped in at the near post from Bryson's low cross.

Midfielder Bryson added a third with a brilliant solo effort, cutting in from the left flank and curling a low shot into the bottom corner with goalkeeper Matt Gilks unsighted.

But with little to cheer on the pitch, the home supporters directed their anger towards Blackpool owner Karl Oyston, and there were ugly scenes towards the end as fans clashed with stewards.

"I heard the protests and what the fans were singing, and I'm not going to kid anyone. I can't tell the fans what to do or what to chant. It's not a great help to the players. But they pay their money and feel they have right to say what they want.

"I've seen inside the club what's being spent and it's not what people are making out. The budget is a good enough budget to compete in the Championship."

"There was a real focus and determination and it was a big win. Psychologically, it was huge. Performance is the key thing and that was excellent.

"We've got one foot in the door in terms of the play-offs and Saturday at home to Huddersfield becomes another big game. We need to get over the line."