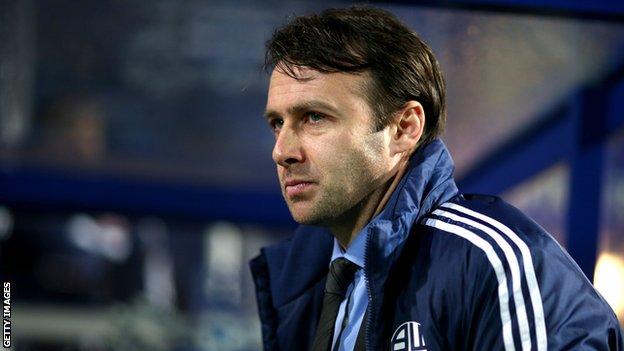 Bolton stretched their unbeaten away run in the Championship to six matches as they won at relegation-threatened Doncaster Rovers.

Neil Danns fired home the opener from the edge of the box to give Bolton a deserved early lead.

Joe Mason doubled the lead from a tight angle on 15 minutes.

Bolton have lost only one of their past 11 games, winning six of them, to move clear of the relegation zone and into mid-table safety.

Bolton have lost only one of their past 11 games, winning six and drawing four.

The defeat though, a third in four matches, leaves Doncaster just four points clear of the drop zone.

Bolton began at a blistering pace and looked set for a comprehensive victory after securing a two-goal lead inside the opening quarter of an hour.

A low right-wing cross from Alan Hutton was stepped over by a couple of players and Danns charged in to fire home a superb shot from the edge of the box.

Lee Chung-Yong then headed down a free-kick and Mason shot into the net from a tight angle, before Cotterill brilliantly curled in a 30-yard free kick for the hosts.

The home side dominated the second half and had a penalty appeal rejected by referee Gary Sutton when James Husband appeared to be brought down by Mohamed Kamara in the 60th minute.

But despite their best efforts, Doncaster could not find a way to beat Bolton goalkeeper Adam Bogdan for a second time.

"Why the penalty wasn't given, I haven't a clue. I've seen it back on video and it only confirms what I thought at the time - it was a stonewall penalty.

"That's a defining moment in the game but these decisions just seem to be going against us."

"It was an excellent three points and I thought we deserved it with the way we imposed ourselves on the game at the start.

"You have to give credit to them for the way they came back at us and we had to make one or two changes to combat that."

Shots on Target
Home5
Away11