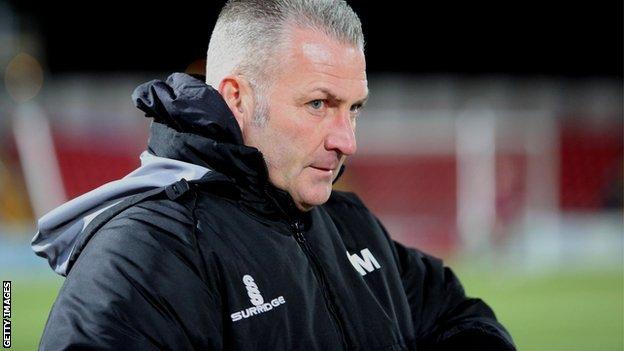 Former York City boss Mills, 52, took over from Anth Smith with the club 19th in the Conference Premier table, and has since overseen a transformation.

lifted them to third with just six games left.

"Gary deserves all the credit. He has done a tremendous job and is widely recognised as being one of the best managers in non-league," said Wood.

At previous club York, Mills won both the Conference Premier play-offs and FA Trophy in 2012.

But despite the club being 18th in League Two with two months of the season left.

"You can see why he's so highly rated when you work with him," Wood told BBC Late Kick Off North East & Cumbria.

"I think he could be one of the best managers in the Football League too - he's very talented."

Gateshead were last at that level in 1960. The club's highest finish since came in 1996 when they placed fifth in non-league's top-flight.

In 2012, then-manager Ian Bogie led them to eighth in Conference Premier, two years after Wood had turned the club professional.

"We have probably lost two generations of support since getting voted out of the League," he explained.

"But I think there is certainly enough potential here to get the crowds back. Promotion would be huge - it'd increase income by around £1m."