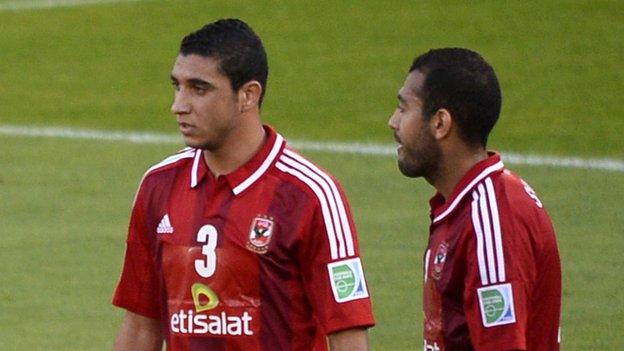 They will now face Jadida over two legs in April in the play-offs to reach the group stages of the second-tier tournament.

"Facing a fellow North African club will be a motivating factor because of the regional rivalry," said Ahly official Hany Rashad.

"No Egyptian club has won the Confederation Cup and we want to be the first to achieve that feat."

Ahly made a disastrous Confederation Cup play-offs debut five years ago, surrendering a 3-0 first-leg lead over Santos of Angola before losing a penalty shoot-out.

Jadida impressed in Confederation Cup home games this year, scoring eight goals in victories over Sonabel of Burkina Faso, Gamtel of Gambia and Kigali of Rwanda.

An Ahly defence marshalled by soon-to-retire Wael Gomaa, 38, will have to be particularly watchful of Ayoub Nanah, who has netted five times.

South Africa's Kaizer Chiefs also drop down to the Confederation Cup from the Champions League after being beaten 3-2 on aggregate by AS Vita Club of the Democratic Republic of Congo.

They have been drawn against Asec Mimosas of Ivory Coast.

Kaizer Chiefs had considered withdrawing from the competition for "technical reasons", even though that would have meant the Confederation of African Football would impose on them a three-year ban from continental competitions.

But a Kaizer Chiefs spokesman confirmed to BBC Sport on Tuesday that the club had decided to compete.

There is a growing sense that one issue affecting African club competitions is the financial losses that would be incurred by playing in the events.

With teams racking up huge travel expenses to compete across the continent, the financial rewards on offer, even for the winners, do not cover their costs.