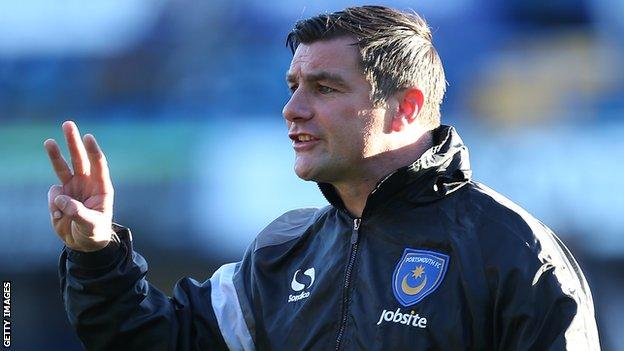 Richie Barker has revealed he accepted an offer to become assistant boss at MK Dons just days after being sacked by Portsmouth in order to take a break from management.

The 38-year-old left Pompey on Thursday and was on the MK bench alongside boss Karl Robinson on Saturday.

"I'm enjoying working with somebody rather than having people work for me," he told BBC Three Counties Radio.

"Once I left Portsmouth I decided I was going to have a break from management."

Barker was appointed Portsmouth boss in December, with the team struggling in League Two and recovering from administration.

His spell in charge at Fratton Park lasted 20 games, and he was dismissed with the club just two points above the League Two relegation zone.

"In the end the best thing for everyone was to get a fresh face," added Barker, who was also sacked by Crawley in November despite leading the Sussex side to their highest finish in League One last season.

Robinson's previous number two, Gary Waddock, left the Dons to manage Oxford earlier this month, and Barker replaced him in time to be part of the coaching staff for Saturday's defeat by Wolves.

"I had a conversation with Karl not long after I'd left Portsmouth. I agreed I would help him until the end of the season," he added.

"It was an enjoyable day and something extremely different. It's the first time I've sat in a dugout and not been the manager. But I enjoyed it and it's a good staff and a good group of players."