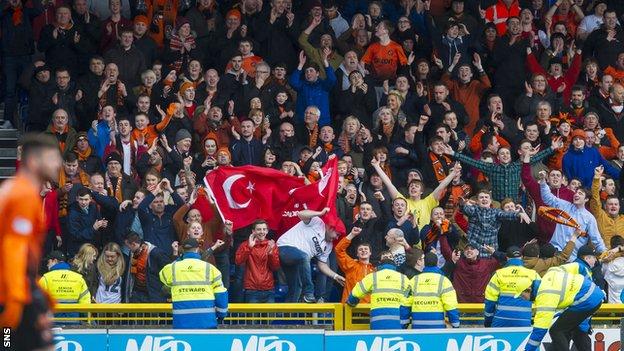 Dundee United have sold 10,500 tickets for their Scottish Cup semi-final against Rangers at Ibrox.

United had previously indicated they would seek up to 20,000 tickets for the encounter on 12 April.

"We'll probably have to get back to the SFA in the next couple of days to let them know the numbers," said United director Derek Robertson.

"I'd urge anyone who has not yet bought their tickets to do so in the next few days."

With Hampden Park being redeveloped for the Commonwealth Games, the SFA chose Rangers' stadium to host both semi-finals back in October.

Robertson said it would be the biggest support the club had taken to a semi-final, adding: "We're very happy with the numbers so far."

United were offered 11,063 seats, only for the club's representative to say that "in order to ensure maximum attendance", United would prefer to only be allocated the 8,012-seat Broomloan Road stand.

The club had complained about Ibrox being chosen as the venue for the Cup tie, but last weekend SFA chief executive Stewart Regan defended the move.

"When you're putting a major cup competition together, you tend to spend a lot of time discussing it with your sponsors. We did that with William Hill.

"It was decided that in terms of planning we recognised that Hampden wasn't going to be available so we needed two stadiums, ideally, in order to be able to take the semi-finals and final to venues that would cope with the demand for tickets."