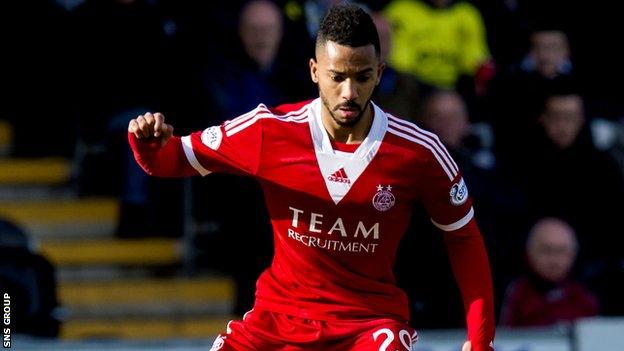 Manager Derek McInnes thinks Aberdeen "have a lot in their favour" if they want to extend Shaleum Logan's stay beyond his loan spell.

The 26-year-old full-back moved to Pittodrie from Brentford in January and will be a free agent in the summer.

"If Shaleum wants to be here next season, I think there's a good chance we could try and make that happen."

Logan made his Dons debut in the 4-0 League Cup semi-final win over St Johnstone and has since picked up a winners' medal from that tournament.

I'd like us to finish second, of course, and we'll work extremely hard to try and do that

The Englishman has yet to experience defeat for the club as Aberdeen challenge for second spot in the Premiership and prepare for another semi-final meeting with St Johnstone - in the Scottish Cup.

"He's played a lot of big games since he's been here," added McInnes. "He's seen exactly what Aberdeen's all about."

Another January recruit to make a positive impact is striker Adam Rooney, who has scored eight goals in 12 matches since signing from Oldham.

"Adam has come in and given us something at the right time," explained McInnes.

"Since he's been here, he's been terrific for us. He works extremely hard for the team first and foremost and he's a taker of chances.

"The team, as whole, has been fantastic behind that. We've tried to be quite fluent with the three behind him, whoever's been asked to support the main striker.

"But it's so important to have that focal point. He's scored eight in 12, which is impressive at any level."

Aberdeen lead Motherwell by two points in the race to be runners-up in the Premiership but McInnes said he "isn't obsessed with finishing second".

"It's great to have so many important games, including a cup semi-final. It's good to have games that mean something," he said.

"We will finish where we deserve. I'd like us to finish second, of course, and we'll work extremely hard to try and do that.

"We've still go a lot to play for and we've still got it all to do to be in those European spots at the end of the season."