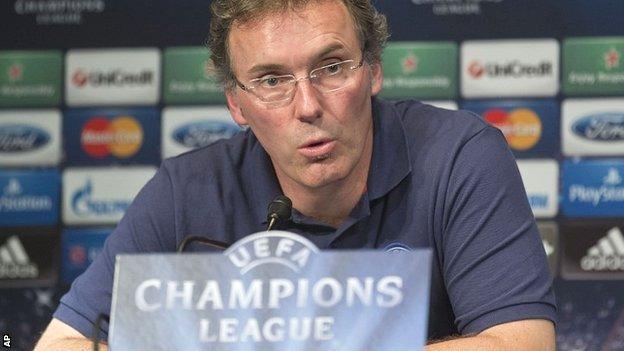 Mourinho claimed PSG had it easy domestically with only big-spending Monaco challenging their dominance.

"If I remember correctly, I think it was the same for him in Spain, with Barcelona and Madrid," said Blanc of former Real boss Mourinho's comments.

The teams meet on Wednesday in Paris.

"The only answer we want to give is to show a great performance," added Blanc ahead of the first leg in Paris.

Paris St-Germain, owned by the Qatar Sports Investments, have invested heavily in their playing squad and are likely to pair Edinson Cavani and Zlatan Ibrahimovic, signed for a reported total in excess of £70m, up front.

PSG have been rumoured to want to add Chelsea's Eden Hazard to that attack, despite the Belgian insisting he is happy in London, and Blanc refused to be drawn on the possibility of a summer bid.

Ibrahimovic insists that despite PSG's extensive and expensive player recruitment, the French side are eight years behind Chelsea, who underwent a similar transformation in the wake of owner Roman Abramovich's takeover in 2003.

"I think Chelsea is the super favourite," the Sweden international said, before adding that, at 32, he was unlikely to ever play in the Premier League himself.

"This is my last contract in Europe and to win the Champions League, I will have to win it with Paris,

"The day I stop with football it will not be that I look back and I say to myself 'Maybe I should've played in England.'

"I haven't been part of it. I made stories in other countries. It's nothing that I regret."

Mourinho though believes PSG are the favourites for the tie, claiming the French side have three forwards among the leading strikers in Europe.

"It's a team full of fantastic strikers and goalscorers and that is what really makes the difference in this level," said Mourinho.

"You look to the teams in the top eight at this moment, all of them good teams, good structures, with a certain philosophy, but after that you go and you see [Barcelona's Lionel] Messi, [Real Madrid's Cristiano] Ronaldo, [Borussia Dortmund's Robert] Lewandowski, [Atletico Madrid's] Diego Costa, and [PSG's] Ibrahimovic, [Edison) Cavani, and [Ezequiel] Lavezzi.

"They (PSG) have lots of them. At this level it's a very important part of a team."

Fernando Torres is likely to start up front for Chelsea as Samuel Eto'o (hamstring) did not travel and Demba Ba has been used sparingly this season.