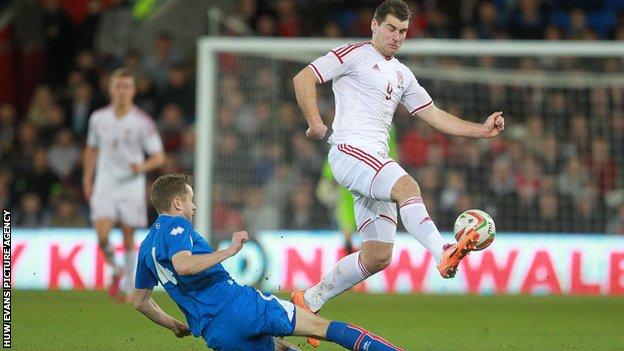 It is feared he could be a doubt for Wales' opening Euro 2016 qualifier against Andorra on 9 September.

"We haven't got an abundance of strikers so in strength in depth it's not great," Coleman said.

"There's other permutations we can look at, other players there.

"We'll be prepared for that, [but] it's just a shame that we've lost Sam at an important moment. It's so frustrating."

Former Wolves striker Vokes has been in impressive form for Burnley this season, scoring 20 league goals to help the Clarets into second place in the Championship.

Vokes has scored six goals in 31 Wales appearances and was on target when Coleman's side beat Iceland 3-1 in Cardiff on 5 March.

Coleman says the injury is not only a blow for Vokes personally but also Wales ahead of the Euro 2016 qualifiers.

"It's a huge disappointment for Sam and we're going to be right with him, right by his side to try and get him back to one piece," Coleman said.

"For us also it looks like we're going to miss him at the start, unfortunately, of what is going to be a very intense campaign.

"He's terrific to work with and this year he's been getting his just rewards.

"He's worked really hard, he's scored loads of goals for Burnley and it looks like they're going to go to the Premier League.

"He's been a massive influence on that and he's gone and got that injury and that can happen to anybody. It's one of those freak things.

"He'll be back, the sooner the better."

Ipswich have extended the loan of the 20-year-old Welsh international until the end of the season.

"He's a good player Jon and we've seen that at the top level," Coleman said.

"He's gone to Ipswich and he's having a rip roaring time. He's been man of the match four games out of five and scored a few goals.

"It's nice to see he's enjoying his football.

"I think Tony Pulis [Palace manager] has done the right thing in sending him out on loan to get some games."