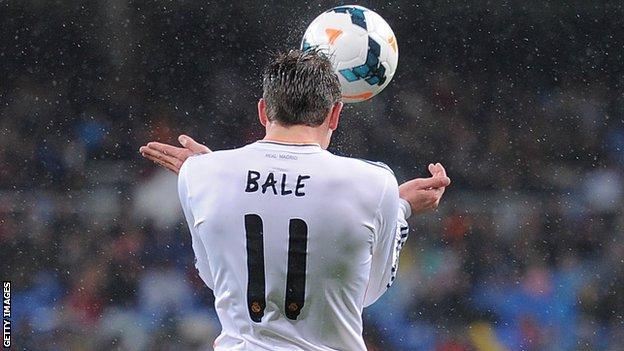 Luka Modric has praised Gareth Bale's efforts since his arrival at Real Madrid, who host Borussia Dortmund in Champions League on Wednesday.

Bale's ex-Tottenham team-mate Modric added: "He... has scored a lot of goals and given many assists.

"He is a very important player for us. I don't think he has been very selfish."

Bale will not revert to left-back amid Real Madrid's injury problems ahead of their quarter-final first leg against Dortmund.

"Bale at full-back is not an option for us," said Ancelotti.

"We have a problem with Marcelo, but we can cover his absence well with Coentrao."

Bale scored twice in Real's 5-0 win over Rayo Vallecano on Sunday, but has been criticised in some quarters for not having an impact in some of their bigger La Liga games this season, including a 4-3 home defeat by Barcelona.

Ancelotti says Bale's inconsistency is down to his position and attacking style of play.

"I think it is true he is a little intermittent, but that is a characteristic of all forwards and especially very quick players," said Ancelotti.

"Players with that speed can't have a continuous influence likes other players with different characteristics like [midfielder] Xabi Alonso.

"His inconsistency is a physical characteristic of the player, like Cristiano (Ronaldo) or (Karim) Benzema. It is not an attitude problem."