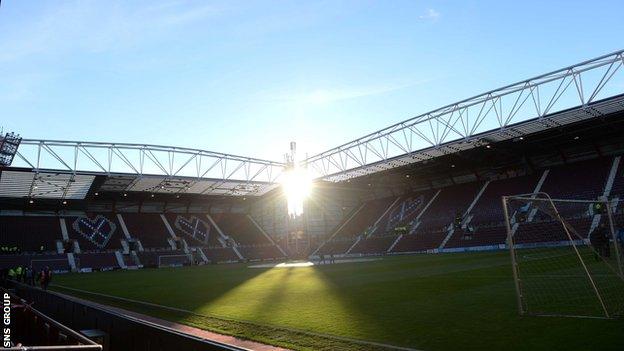 Brinksmanship was always a potential threat for Hearts. Agreements in principle can be superseded and the sense around Tynecastle is of events in Lithuania having moved into alarming territory.

Options remain, though, and the most pressing concern is the sense of uncertainty, since contingency plans need to be considered.

Bryan Jackson of BDO, the administrators of Heart of Midlothian Football Club plc, does not know exactly what lies behind the delay to the creditors meetings of Ukio Bankas and UBIG, which had been expected to formally confirm the deals to pass a majority shareholding in HOMFCplc and ownership of Tynecastle Stadium to BIDCO and then ultimately to Foundation of Hearts, a coalition of supporters groups.

A memorandum of understanding had been agreed between BDO and administrators in Lithuania who are handling the affairs of Ukio Bankas and UBIG, who hold 29.5% and 49.47% stakes respectively.

BIDCO, the vehicle set up to fund the Company Voluntary Arrangement to take HOMFCplc out of administration, had agreed to pay around £2.5m to Ukio Bankas and around £100,000 to UBIG.

In the event of the CVA failing, Jackson thinks it unlikely that the creditors in Lithuania would receive a better offer.

So the current stance seems self-defeating. Both Ukio Bankas and UBIG have delayed their creditors' meetings to 7 April, which is essentially taking Hearts to the brink.

Jackson has enough funds to keep running the business until the end of this month, at which point additional money will be required just to keep the Edinburgh club afloat.

So what is delaying the completion of the deal? Sauliu Bank, one of the major UBIG creditors, is believed to be unhappy with the price being offered by BIDCO.

The role of millionaire businesswoman Ann Budge in funding BIDCO's offer was initially kept out of the public domain, in part because of the concern that her involvement might have been reflected in the price that was agreed.

Some creditors may believe that holding out will force a higher offer.

That stance, however, would need to be balanced against a potential zero return should the CVA fail.

There are further complications, though, not least the fact that there will be little affection for, or interest in the fate of, Hearts in Lithuania. Some creditors may even still be railing against the decisions made by Vladimir Romanov, the former Hearts owner, which brought about this financial crisis.

Jackson has engaged in lengthy discussions with David Hunt, the British ambassador to Lithuania, and he intends to meet Her Excellency Asta Skaisgiryte Liauskiene, Lithuania's ambassador to the UK, on Friday. Political pressure has already been deployed, given the involvement of Ian Murray the Edinburgh South MP in FoH and the closeness of Lord Foulkes, the former Hearts chairman, to the Tynecastle club.

There is often a last-minute delay in the process, and Jackson has experienced several in the past at other clubs in administration. Even so, there seems little option for the creditors in Lithuania other than to accept the BIDCO offer, even if Budge's personal wealth could facilitate a higher figure. There were, after all, no other bidders who could match the terms.

Jackson is keen to attend the creditors' meetings next week, since personal contact might be helpful. He has also grown increasing frustrated with telephone calls and emails going unreturned. There can be mitigating factors, since it is a different jurisdiction and culture, but it seems in the best interests of all parties to conclude the deal.

In the event of 7 April passing without a resolution, or with a negative outcome, Jackson has options.

He could ask for funding from Budge to take the club through to the end of the season. FoH has already been raising funds through direct debits from supporters, but the intention is for that money to provide working capital post-administration. Jackson would, though, be wary of seeking additional running costs from either source without a guarantee of an eventual positive outcome.

Liquidation remains the worst case scenario for Hearts. A precedent was set when Rangers Football Club plc entered liquidation in the summer of 2012, with the business and assets being purchased by Sevco Scotland, who were then also granted a membership transfer by the Scottish Football Association.

Votes by the Scottish Premier League and Scottish Football League clubs then saw Rangers start the following season in the bottom tier.

Nobody at Hearts wants to yet acknowledge the prospect of liquidation, although the general feeling is that the chances are currently 50/50. Pressure can be applied in Lithuania, and stances may change up to the last moment.

There is more at stake in Scotland than in Lithuania, but Jackson has negotiated his way out of dire situations in the past. Hope remains a valid commodity at Tynecastle.