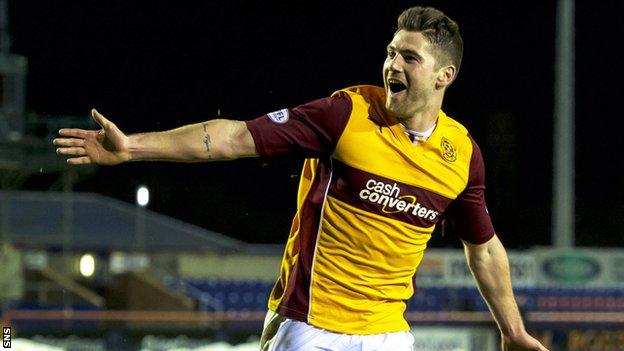 Stuart McCall said Motherwell proved their critics wrong after a 2-1 win over Inverness moved them into second place in the Scottish Premiership.

McCall told BBC Scotland: "Everyone looked at the game on Saturday [2-1 defeat to Kilmarnock] and thought we'd run out of steam, the bubble's burst.

"I don't think many people had us to come up here and win."

The three points put Motherwell into pole position for one of the Europa League spots for 24 hours at least ahead of Aberdeen's visit to Tynecastle on Wednesday.

We reduced them to virtually nothing until Greg Tansey's effort hit the woodwork.

In a game of few chances it looked like 18-year-old Christie's equaliser - his first for the home club - would ensure a share of the points before Vigurs finished off a counter-attacking move seven minutes from time.

"We wanted to win the game," said the Motherwell manager. "At 1-1 there was no designs on us trying to stick for a point.

"I'm delighted for the effort and the work that they put in because we had a few young lads out there, then Craig Reid had to come off and Anier got bad tackle first-half, but I thought the work ethic tonight won the game.

"We said before the game it won't be the greatest game of football because of circumstances, but as long as we can get about them, stop them playing, and take the chances when they come along.

"I thought the game plan up until they scored worked well. We reduced them to virtually nothing until Greg Tansey's effort hit the woodwork.

"It's a fantastic goal by Vigurs to win it for us.

"I don't normally show any emotion because it can come back to bite you.

"I felt because of the way we'd stopped them creating any chances was a massive plus. We've been up here before and they've cut us open a few times and beat us two and three-nils."

He added: "The time for plaudits come at the end of the season, but we're happy with what we're doing. That was a big result tonight on the back of Saturday, and that was about character tonight."