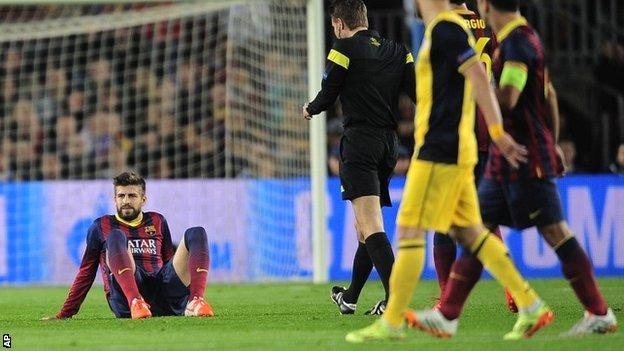 Barcelona will be without Gerard Pique for four weeks after he suffered a hip fracture in the Champions League quarter-final with Atletico Madrid.

The 27-year-old defender fell heavily after an aerial challenge with Diego Costa, who was also taken off with a hamstring injury later in the 1-1 draw.

Pique will miss the second leg of the quarter-final and the Copa Del Rey against Real Madrid on 16 April.

Pique walked off the pitch and was replaced by Marc Batra in the 12th minute as Barcelona went behind to Diego's stunning away goal.

But they recovered to draw the tie level after Neymar swept in from Andres Iniesta's defence-splitting pass.

Gerardo Martino's side trail Atletico Madrid by a point in La Liga and Pique could now miss three league games and the Champions League semi-final first leg, should the Catalan side get that far.

Meanwhile, Atletico boss Diego Simeone has been left sweating on the fitness of his top scorer Costa.

Costa has scored 33 goals this season and his absence for the return leg on 9 April at the Vicente Calderon Stadium would be a major blow.

"We'll see [on Wednesday] how bad it is," Simeone said.

Atletico midfielder Tiago added: "Let's hope we can count on Diego Costa, we need him."