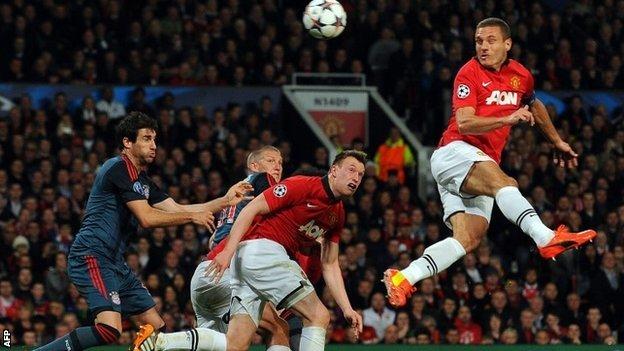 "We know we've got to score a goal in the second leg. We have to do something about it," said Moyes.

"But we've given ourselves a great opportunity."

Bayern Munich will be without midfielder Bastian Schweinsteiger for the second leg after he was sent off.

With Thiago Alcantara also ruled out after sustaining knee ligament damage in the weekend's draw with Hoffenheim and Javi Martinez suspended, Moyes's Bayern counterpart Pep Guardiola will be forced to change his midfield before the return in Bavaria on 9 April.

The former Barcelona coach revealed he had spoken to referee Carlos Velasco Carbello after the match to complain about Schweinsteiger's second yellow card for a foul on Wayne Rooney late in the game.

Schweinsteiger gestured that he believed Rooney dived to draw the decision, but his manager refused to go as far.

When asked if he agreed with the decision, Guardiola said: "Absolutely not."

"He is a very good referee. He made a very, very good game, but it is unfair," he added.

"To win the Champions League you have to solve and overcome everything. In football this kind of thing happens."

While Manchester United's Premier League title defence has been disappointing, they have performed better in the Champions League, winning their group and recovering to beat Olympiakos 3-2 on aggregate in the last round.

"We'll go toe-to-toe with them," Moyes said of the second leg against Bayern.

United could have taken an aggregate lead from the first leg with Danny Welbeck having a goal disallowed for a high foot before wasting an excellent chance when one on one with goalkeeper Manuel Neuer in the first half.

"I believe Bayern Munich had a fight on their hands before the first leg as well," Moyes replied when asked if it was important Bayern knew they faced a battle in the second leg.

"Tonight's performance was more what you'd hope for. I am happy with the performance, but a bit disappointed with the result in the end."

Manchester United, seventh in the Premier League, travel to Newcastle on Saturday before the return leg.