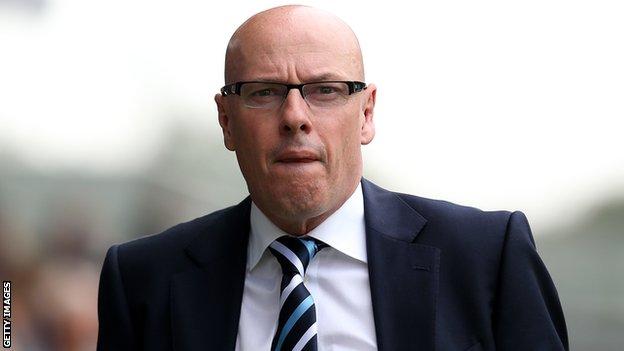 Leeds boss Brian McDermott is refusing to quit after his side lost 1-0 at home to struggling Charlton - and called the club's current situation a "joke".

The defeat comes just days after the players were forced to defer their wages following the failed takeover by Massimo Cellino.

"I've been in football 30-odd years and I've never experienced anything like this," said McDermott.

"Both on and off the pitch, it's just a joke when I think about it."

12 April 2013: Appointed as Neil Warnock's successor on a three-year contract

4 May 2013: Leeds finish 13th in the Championship after winning three and losing two of their five matches under McDermott

4 January 2014: Leeds are knocked out of the FA Cup third round by a 2-0 defeat at League Two Rochdale

29 January 2014: McDermott admits that the uncertainty at the club has affected results

31 January 2014: McDermott is told his contract is being terminated, according to the League Managers' Association

1 February 2014: According to the LMA, McDermott is asked not to take the team for the 5-1 win over Huddersfield before Leeds release a statement saying he is still the manager

He added: "Someone's just said to me that people are saying I should resign.

"Well actually, if people know what's gone on here and what I've had to go through, then to make that suggestion ... They won't see me resigning, no way, absolutely no way."

McDermott, who replaced Neil Warnock as Leeds boss in April 2013, was sacked on transfer deadline day.

His departure came as Cellino closed in on an agreement to take over the Championship club.

A day later McDermott was back in charge at Elland Road after the club issued a statement saying "he has not been dismissed from his post as has been suggested. We look forward to him continuing in his role with us in taking Leeds forward."

The Football League blocked Cellino's proposed takeover last Monday, but he has since lodged an appeal.

"Probably I wouldn't be here. They'd have made a decision and when the new ownership comes in that decision will be made, who ever it might be.

"At this moment in time we haven't got that decision, so we need to get that quick."