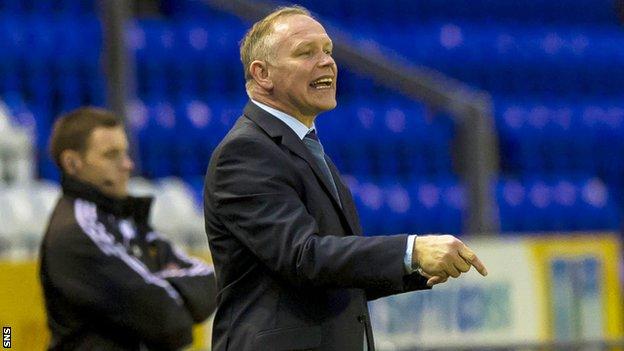 John Hughes refused to give up on a place in the Europa League after his side lost 2-1 at home to Motherwell.

Ryan Christie's first goal for the club looked to have rescued a point after Henri Anier broke the deadlock, but Iain Vigurs struck late on.

He said: "The other teams are getting away from us now. However, we have to regroup and go again.

"This is a test of character for us. We can't sit back and rest on our laurels."

It means Inverness have won just once at home in 2014, and now sit 10 points behind third-placed Aberdeen who have a game in hand.

"It's two long balls that have beat us tonight," he told BBC Radio Scotland. "They were very hard to break down, they got behind the ball.

"But, in terms of us getting on the ball and being the home side we passed it very well, but we never passed it with a real purpose or a belief that we can go and get it in there or link up around the edge of the box.

We gave it our best shot but we can't keep giving goals away the way we're giving them.

"It takes time, you need to give them time and educate them.

"We've done everything that we can to try and win the football match. The substitutions I felt were right.

"Young Christie coming on, getting more round about [Keith] Lasley, and he got his goal, that's a positive.

"Marley Watkins coming on and Greg Tansey going to right-back but still bombing on with more energy than David Raven and it worked a treat.

"We gave it our best shot but we can't keep giving goals away the way we've given them tonight. We just need to dust ourselves down and get on with it, we've got a derby match Friday night and we're looking forward to it."