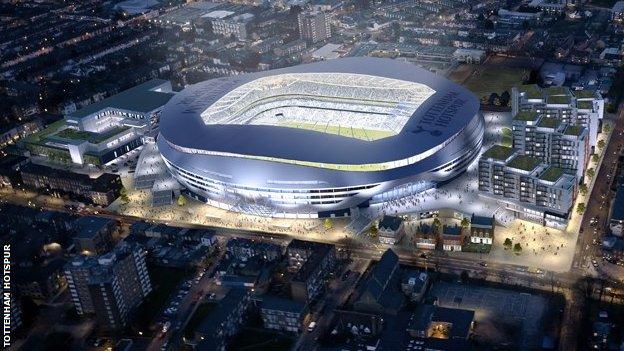 Tottenham Hotspur hope to be able to move into their new 58,000-capacity stadium in 2017.

The new stadium would be next to their current White Hart Lane ground, which holds 36,000 fans.

Tottenham anticipate putting out a tender for construction later this year and say opening the stadium in mid-2017 is "feasible".

The news comes on the day Tottenham announced a profit of £1.5m in their latest financial results.

The north London club, who are currently sixth in the Premier League, believe moving to a bigger stadium will help them increase their revenues and enable them to compete better against Europe's top clubs.

"We have fantastic, strong support," chairman Daniel Levy told his club's website. "Our current 36,000-seater stadium sells out and the waiting list for season ticket holders is currently in excess of 47,000.

"We have the smallest capacity stadium of any club in the top 20 clubs in Europe, let alone the current top four Premier League clubs.

"We cannot stress strongly enough how critical the new stadium is over the long term to these raised expectations."

Levy described the new venue - which would be built as part of a development that would also include the land their current home stands on - as a "landmark project" which will be a "key regenerative component of the local economy".

Tottenham, who lost out to West Ham United in a bid to move to the Olympic Stadium in Stratford, have purchased 18 acres of land adjacent to their White Hart Lane ground over the past decade and relocated 72 businesses.

They are still waiting for a Secretary of State decision regarding a compulsory purchase order of further property before building can begin.

But they anticipate putting out a tender for construction before the end of this year and hope the new stadium will be open for the 2017-18 season.