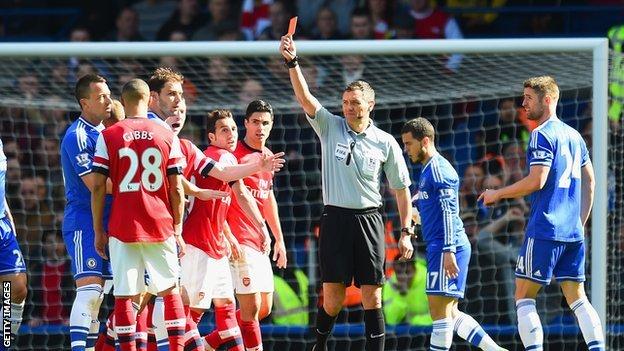 Andre Marriner has been chosen to referee the FA Cup semi-final between Hull City and Sheffield United at Wembley on 13 April.

The 43-year-old issued a red card to the wrong player in Chelsea's 6-0 victory over Arsenal last month.

Arsenal's semi-final against Wigan will be refereed by Michael Oliver.

After the game between Chelsea and Arsenal at Stamford Bridge, Marriner apologised for mixing up the identities of the players.

Gibbs's red card was later transferred to Oxlade-Chamberlain, but he escaped a ban when a disciplinary panel ruled he had not denied a goal-scoring opportunity because Hazard's shot was going wide.

FA Cup appointments are made by the Football Association while officials for Premier League matches are chosen by Professional Game Match Officials Ltd (PGMOL).

Marriner received a show of support from the PGMOL when, instead of being dropped for the following weekend's fixtures, he was selected to referee Southampton's 4-0 victory over Newcastle.