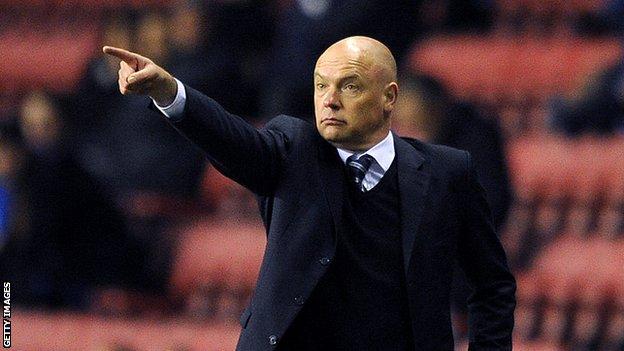 Manager Uwe Rosler says Wigan Athletic will reach the play-offs if they "show respect" to their opponents in the final seven Championship matches.

The Latics are fifth and have a six-point advantage over seventh-placed Nottingham Forest after Tuesday's 2-2 draw with leaders Leicester City.

Two of Wigan's three league defeats under Rosler have come against teams in the bottom half of the table.

"Every time we play a team in the top 10, we raise our standard," he said.

"We can compete against anybody in this league, but we have lost to Doncaster and Huddersfield.

"That is no disrespect to anybody in this league. We have to realise that, in this league, you have to show everybody respect and that is the next learning curve for my players.

"If we continue to do that until the end of the season, we will definitely be in the play-offs. With the squad we have and the spirit we have created, anything can happen."

Defender Rob Kiernan was singled out for special praise by Rosler after scoring his first senior goal against the Foxes and impressing in only his third league start for the club.

The German, who replaced Owen Coyle as Wigan boss in December, told BBC Radio Manchester: "He played his first game against Watford, then QPR and then tonight. You can't get harder than that.

"The way he played with and without the ball was excellent. The boy can go a long way."