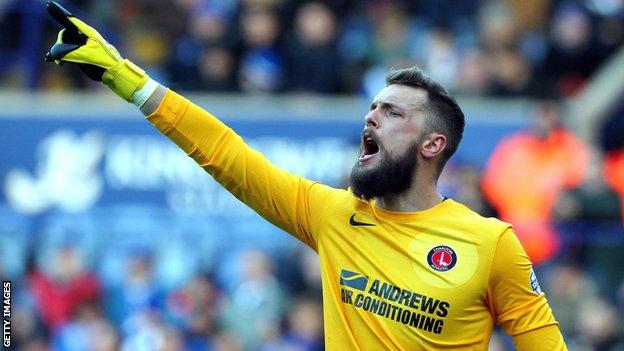 Charlton goalkeeper Ben Hamer says Tuesday's 1-0 win at Leeds will provide a welcome boost in their bid to avoid relegation from the Championship.

The Addicks are now three points clear of the drop zone, with a game in hand.

The 26-year-old told BBC London 94.9: "It gives us belief. Why can we not breed confidence from this?

"The fixtures are very demanding in this league and we have games Saturday-Tuesday until the end of the season. There is no rest for the wicked."

He added: "We are in a predicament at the minute and need all the points we can get.

"The quicker we are safer, the better."

Hamer was instrumental in Charlton's win at Elland Road, saving Ross McCormack's injury-time penalty kick to keep the score at 1-0.

"You're thinking all the hard work goes out the window as Ross McCormack rarely misses from the spot," Hamer said.

"He had one against me earlier this season and put it down the middle. I just tried to stay up as long as I could to force him into one of the corners and luckily I chose the right way.

"My goalkeeping coach Ben Roberts has been getting on at me as I had not saved a penalty this season. What more important time to do it?

"I've not seen the foul back but at the time I thought it was a bit of disgusting decision. It was just body-to-body and I think justice was served in the end.

"When I'm called upon, I need to make those important saves and luckily I did that."

The win has put distance between the Addicks and the bottom three, and they have a game in hand on 22nd-placed Barnsley and a superior goal difference.

The south east London side have only lost twice in seven games since the appointment of Jose Riga as head coach last month, keeping five clean sheets in the process.

Hamer is optimistic that they can continue their recent record and secure their position in the second tier.

"Momentum in football is imperative," he said. "That's what we are looking to get from the Leeds game.

"When you are down at the bottom sometimes it is a bit up and down. But we are starting to get solidity at the back as we have kept five clean sheets in seven now.

"That is impressive for a team that is down at the bottom. We need to take goals when we get chances and if we do that I am sure we will be alright."