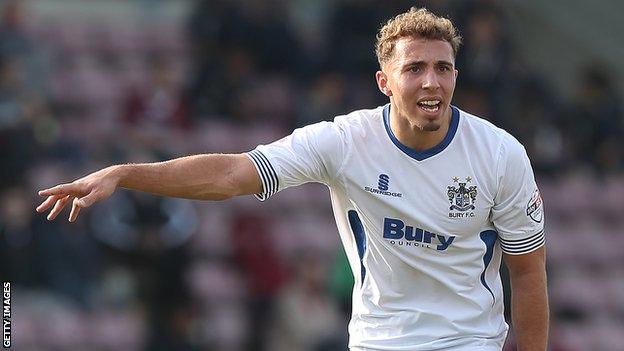 Bury manager David Flitcroft has praised Hallam Hope after the on-loan Everton striker scored in each of his first two games for the Shakers.

The 20-year-old followed his debut goal at Northampton with the opener in Tuesday's win against Bristol Rovers.

"Everton want to develop players in their system," said Flitcroft.

"We were lucky that [Everton manager] Roberto [Martinez] trusted us with one of his players. The way he [Hope] took his goal was outstanding."

A second-half winner from midfielder Tom Soares ensured a 2-1 success and back-to-back victories for Bury, who are 12th in League Two and 10 points above the relegation zone.

The Shakers have won seven, drawn 10 and lost four of their 21 league matches since Flitcroft took control in December, while the former Barnsley boss has also overseen a large turnover of players since his appointment.

The 40-year-old told BBC Radio Manchester: "People will forget the trouble we were in and the work we've had to do. It's been testing - it's tested me as a character, my staff and the chairman [Stewart Day].

"We'll be pressing ahead because I won't allow anyone to sneak into a comfort zone, but it is important to reflect on the job we've had to do."