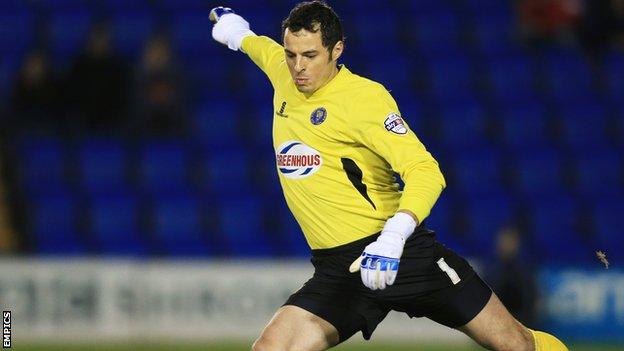 Shrewsbury Town manager Mike Jackson insists that there is nothing personal in his decision to drop previous first-choice goalkeeper Chris Weale.

Town have conceded just nine goals in 10 games since Weale was axed on 15 February, to be replaced by Joe Anyon.

"No player's undroppable," said Jackson. "As regards anything personal, that's not an issue.

"I've got nothing personal against Chris Weale whatsoever," he told BBC Radio Shropshire.

Speaking at a Fans' Forum at the Greenhous Meadow on Tuesday, Jackson added: "Players need to play well, no matter who they are and what standing they have in the squad. That's the same at any club."

Weale was signed by Jackson's predecessor Graham Turner from Leicester City on the same day that Anyon arrived from Lincoln City in July 2012.

That followed the decision of Chris Neal, Town's first-choice keeper in their 2011-12 promotion-winning season, to leave for Port Vale after failing to agree a new contract.

Town's defence has been tightened in recent weeks, with four of their last nine games ending in goalless draws.

But there are concerns among Shrewsbury fans that the popular Weale, whose contract is up in the summer, might be allowed to go the same way as Neal.

Jackson's side, although still only two points adrift of safety, are now bottom of League One following Stevenage's 0-0 draw with leaders Wolves on Tuesday night.

That enabled Stevenage to climb off the bottom ahead of their date with Shrewsbury at the Meadow this Saturday (5 April, 15:00 BST).

Having swapped places, Graham Westley's Boro are now a point clear of Shrewsbury going into what will still be a battle of League One's bottom two.