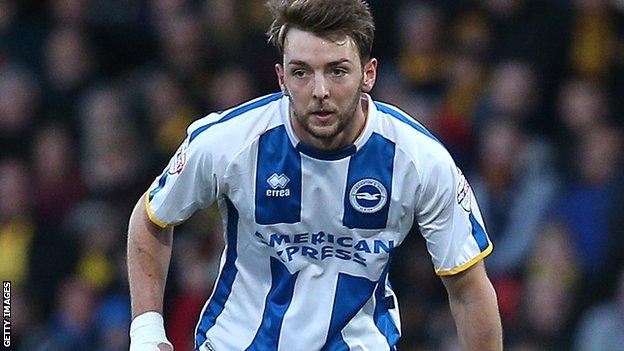 Brighton midfielder Dale Stephens expects the race for the Championship play-off places to go to the wire.

The Seagulls have picked up one point from the last 12 on offer, but are only three points outside the top six.

"We had a poor three results but Reading, Wigan and Nottingham Forest have slipped up as well.

"We have got good characters and leaders on the pitch. We are going to fight until the end," the 24-year-old told BBC Sussex.

Brighton's 3-3 draw at Blackburn ended a three-match losing streak in the Championship and saw them score their first goals since the 2-0 win over Bolton in mid-March.

The Seagulls' play-off hopes had been dented by consecutive defeats against Ipswich, Sheffield Wednesday and Middlesbrough without scoring.

"We can only look after ourselves and we are confident going into the remaining games. It's not over until it's mathematically over."

The Sussex club ended a three-match losing streak on Tuesday when they drew 3-3 at Blackburn Rovers, with Stephens scoring a late equaliser.

It was his first goal for the Albion in what was his eighth appearance following his January move from Charlton Athletic.

"It feels like it has been a long time coming," he said. "I'm delighted to open my account for the club.

"It was a tough game but we dug in and showed character. We got what could be a vital point in the end.

"We have come out of some tough fixtures with three defeats on the bounce so to come away from home against a good side, we need to take the positives."