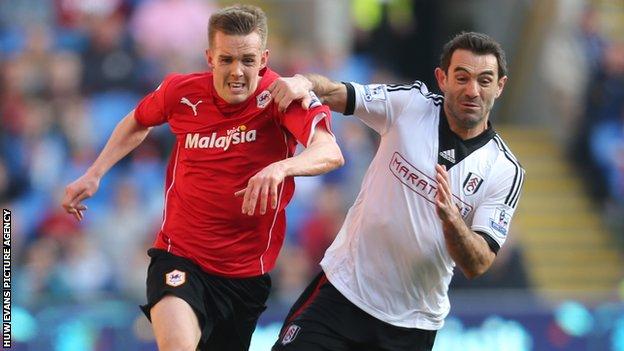 Cardiff City winger Craig Noone believes Saturday's home match against fellow Premier League strugglers Crystal Palace could be one of the biggest in his career.

Noone, fit again after injury, says Cardiff players are well aware of the game's importance.

"These are the must-win games of your career," Noone said.

"You don't get many of them which you have to win, but I think this is one of them.

"It's a massive game and we're targeting three points.

"The lads are all buzzing about and have real belief after that point against West Brom.

"We'll take that into Palace on Saturday and hopefully change that into three points."

Ole Gunnar Solskjaer's side are 18th in the table, three points from safety and with six games of the season remaining.

The first of those six games is against a Palace side whose own survival hopes were boosted by last Saturday's shock 1-0 win over title contenders Chelsea.

Noone missed Cardiff's last two games against Liverpool and West Brom after suffering a groin injury in the 2-1 defeat at Everton.

The former Brighton player has had a frustrating time on the sidelines, but is ready for this weekend's clash at the Cardiff City Stadium.

"To be playing regularly and then to pick the injury up was disappointing," Noone said.

"It's been gutting, especially this time of year. You want to play and help the team.

"It's come at a bad time, but I think I'll only benefit from making sure I'm right.

"I could have rushed back and been involved in the Liverpool game.

"I wanted to play in it but then I thought there's more important games - that's why I sacrificed not playing against them and the West Brom game.

"I want to help the team and to be as fit as possible."