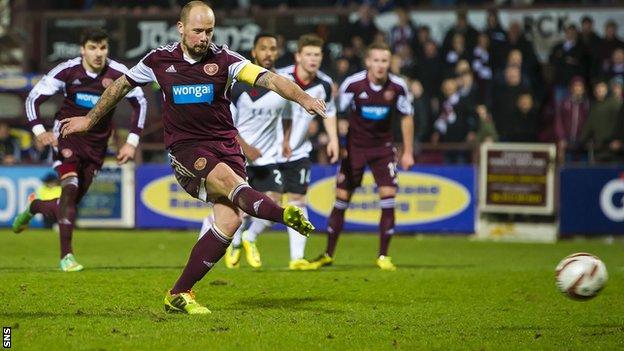 Hearts boss Gary Locke paid tribute to both players and supporters after they drew 1-1 with Aberdeen.

Danny Wilson was sent off and Willo Flood's free-kick put the Dons in front moments later.

However, Jamie Hamill's penalty three minutes from time ensured any eventual relegation is delayed for at least a few more days.

Locke said: "I couldn't be any prouder tonight of the players, but the supporters tonight were unbelievable."

Aberdeen had the better of the first half, but after Locke switched Scott Robinson for Paul McCallum at half-time the home side looked far more dangerous as they kept up their unbeaten run against Derek McInnes's side in this season's Scottish Premiership.

"I thought the boys were magnificent, I could not be any happier," Locke told BBC Radio Scotland.

"First half I thought Aberdeen played well, they moved it really well. I felt we had to make the change at half-time to get ourselves back in the game because we weren't getting enough of the ball.

"But, credit to the boys again. I thought they were absolutely brilliant, every one of them.

"Very few times this season we could say we're disappointed with the lads. Maybe two or three games, but in the main they're giving the football club everything and that's all I can ask as a manager.

"One thing for sure is, the players at the start of the season are better now, there's no doubt about it. They've learned a lot, they've had to learn the hard way at times but they're better players.

"They're more disciplined now, and I feel there's been a big improvement in the team."

Hearts travel to Partick Thistle on Saturday knowing anything less than three points will confirm their relegation, but their main focus is on Monday's creditors meeting between Ukio Bankas and UBIG, where they hope a deal will be agreed to save Hearts from liquidation.

"We just hope that we can get a good result Saturday, then Monday's the big day for us and hopefully all goes well there as well," added the Hearts manager.

"We've been up for the fight all season, having a young squad who have made their errors over the course of the season. But I think you can see that every single player wants to be here and that's the most pleasing thing."