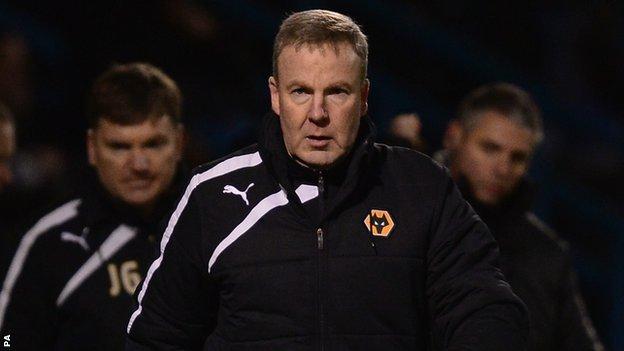 After two successive seasons of relegation, there was not much to smile about when Kenny Jackett strode into Molineux 10 months ago.

It was three and a half weeks after Jackett had resigned at Millwall, on the same day Wolves had sacked Dean Saunders. And the mood among the Molineux regulars was far from upbeat.

Not only were Wolves, who were in the Premier League from 2009 until 2012, preparing for life in League One, they were in a mess off the pitch too.

The view from the press box

"Appointing Kenny Jackett has been vital to Wolves' recovery from their double relegation - but just as crucial was the timing, getting the appointment done early enough in the close season for him to make a difference before the campaign started.

"In the early part of the season the priority was building a reliable defence. Wolves were not always attractive to watch in the autumn, but keeping so many clean sheets gave them full value for their goals.

"New signings made Wolves more potent. While Kevin McDonald is arguably the most important, smart use of the loan market to road-test James Henry and Michael Jacobs before buying them was evidence of good organisation and clear thinking off the field as well as on it.

"Perhaps most of all, the club, and particularly the players, have made an effort to show a sense of responsibility and appetite for hard work. That quickly repaired the relationship with the supporters, as demonstrated by the huge numbers following the team around the country.

"After three years of routinely seeing their team beaten and often humbled, Wolves fans have enjoyed having a side to be proud of once again."

Whoever took the job would have to contend with a divided dressing room overloaded with under-performing players still on top-flight wages.

It needed a man with experience, an old hand with a cool head. And in Jackett, a man schooled in football under the Graham Taylor blueprint of how to play the game, they found him.

"He's a man-manager. He's very calm and knows what he wants. I trust him. What he says goes. If he told me to jump off a roof I'd do it. I've got that much belief in him.

"Wolves couldn't probably believe their luck that they managed to get someone of Kenny's experience of the lower leagues, but also the ability to perform in the Championship as well."

This time last year, things could not have seemed much bleaker for Wolves fans.

About to be relegated for the second time in as many years, they felt embarrassed, looking on in envy as Black Country neighbours West Bromwich Albion soared to their highest league position in more than 30 years.

Wolves were so impressed, in fact, that they opted to follow the Albion management model of working with a head coach, rather than the more familiar job title of 'manager'.

Now, 26 League One victories and nine draws later, head coach Jackett has just been voted the division's manager of the month for March - and Wolves, with a six-point lead at the top of the table, stand on the brink of bouncing back to English football's second tier at the first attempt.

What is more, there is even the prospect of playing Albion in the Championship next season - if the Baggies do not improve their record of having won only once under Pepe Mel.

It all goes to prove it is not the job title that counts. It's the job done by the man in charge.

And, in one of English football's harsher, less forgiving environments, there is no doubt who is 'the boss' at Molineux.

While the Wolves hierarchy offloaded most of last season's Championship flops, Jackett has built a new team of his own - to the extent that, of the team that started against Stevenage in midweek, not one player remained from the starting XI at Brighton on last season's final day.

"I felt I needed to change things round," Jackett told BBC Sport. "The connection between supporters and players wasn't there. That was the first thing we set about trying to change.

"We needed a fresh group of players, who didn't carry that baggage of a double relegation.

"It's a division I know very well. I knew that if you didn't get your fitness and your attitude right, then names on the team-sheet and a Premier League history wouldn't be enough."

It was not always plain sailing before Christmas.

Nottingham Forest's pursuit of Bakary Sako and the continued presence of midfielder Jamie O'Hara, who has spent most of the season training with the second string and has not played since November, were both issues.

And, despite the occasional wobble - namely cup exits to Morecambe, Oldham and Notts County, a defeat at home to neighbours Walsall and then successive losses to Peterborough and MK Dons, Wolves were always right up there.

But they had never really fired on all cylinders, too often reliant on a flash of inspiration from Sako or a piece of prized poaching from Leigh Griffiths, with Kevin McDonald the glue that held it all together in midfield.

Head coach of the month?

Griffiths, in fact, remains Wolves' 13-goal top scorer, despite having scored his last on Boxing Day and then drawing a blank in his next four matches before completing his much-predicted January deadline day move to Celtic.

But, since losing at Gillingham in the last minute on 3 January, Wolves have lost just once in 15 matches, taking 38 points from a possible 45, during which time Jackett's men have forged a new, more potent 'French Connection' up front between Sako and January signing Nouha Dicko.

At one stage, in the space of three consecutive three-goal wins that brought back memories of Dave Jones's free-scoring side of 2002, Sako and Dicko registered nine unopposed strikes between them.

The fact that expensive January signing Leon Clarke has spent the majority of his time on the bench sums up their success.

Another comparison is with the last team to win promotion for Wolves, Mick McCarthy's Championship-winning side of 2009, from which only keeper Carl Ikeme, midfielder Dave Edwards and defender Richard Stearman remain.

"We've had a couple of dark seasons here at Wolves," said Stearman, back in favour after spending the second half of last season on loan at Ipswich.

The view from the South Bank

"The last time I enjoyed following Wolves this much was the season we won promotion to the Premier League in 2008-09.

"That might appear to be stating the obvious - enjoying watching your team win on a regular basis and homing in on promotion. But it's about much more than that.

"Kenny Jackett has done what Mick McCarthy did, and delivered a team that's formed a wonderful alliance with Molineux supporters. All this from the rubble of successive relegations. We were ashamed and angry (see above, on final day of last season). Now we are proud.

"Amazing crowds in League One, particularly at away games, sum it all up. We are being entertained royally and once again we have players who we trust. And a manager to whom we are indebted."

"Obviously we're a division lower, and hopefully going up this time, but you can't beat that winning feeling."

Jackett has been backed by the sort of resources unavailable to most of their League One rivals - and promotion was always expected of them.

But that brings pressures of its own. And the winning feeling is one Jackett was convinced he could bring back when he took over on 31 May.

"It's a fantastic club with first-class facilities which was down on its knees after successive relegations," he said.

"Coming out of the Premier League was a blow but nobody expected them to fall straight through to League One. It has been a tough period for the supporters to see that happen over two years.

"But Wolverhampton is a one-club town. You only see Wolves shirts around. That's fantastic.

"The potential and the tradition of the club is a big one, with a very recent Premier League history. Mick McCarthy took them up and kept them there for three years, which is a terrific achievement.

"We know the potential is there. That was the big attraction. With that comes high expectation and I'm happy to accept that responsibility. It's not something that frightens me.

"A lot of people turn up for Wolves games, home and away, and it's our responsibility to put on a performance that gets our supporters going."

For all that, those Wolves fans with painful memories of 2002, when they were caught on the line by, of all teams, Albion, know they are not quite there yet.

The cautious, level-headed Jackett knows it too.

But he admits: "If we can write our own small piece of history to add to the tradition at this club, that will be a fantastic achievement."