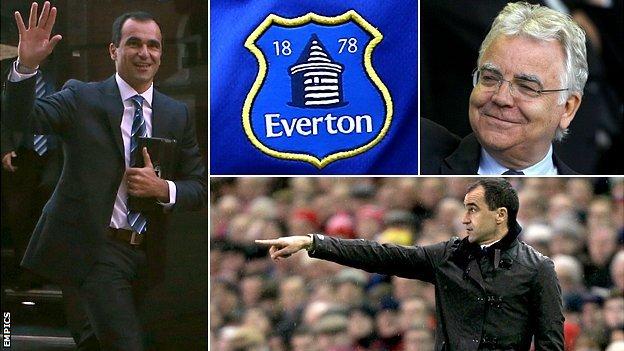 Everton chairman Bill Kenwright was given an instant insight into the confidence and positive mind-set of the man he chose to replace David Moyes on his first meeting with Roberto Martinez.

After appointing the 40-year-old Catalan to succeed Manchester United-bound Moyes after 11 years at Goodison Park, Kenwright revealed: "Almost his first words to me were 'I'll get you into the Champions League'."

Martinez's words were regarded by many as a bold private promise that he would struggle to keep in reality. One look at the current Premier League table gives the lie to those doubts.

Martinez has made a seamless transition from Moyes while playing his trademark stylish passing game and winning over the sceptics who doubted his appointment when relegation followed his historic FA Cup win with Wigan Athletic last season.

Was Martinez the manager who would always live in the lower reaches of the Premier League, or was he one of the game's most gifted young bosses who would flourish with greater resources?

As he prepares to face Arsenal, Martinez appears to have answered the question while turning Everton into one of the country's most watchable, easy-on-the-eye teams.

Behind Martinez's smiling exterior lies a manager with a passionate devotion to the game, a man who has an L-shaped sofa in his home so he can spend time with wife Beth while both can watch different televisions - because his is invariably tuned in to football.

Martinez has charmed Everton's fans by embracing the club's rich history. The walls on a stairway at the club's Finch Farm training headquarters are adorned with images of Everton's finest moments - with a blank canvas left at the top as an inspiration to create new successes.

He even took part in a pre-Christmas video parody of Morecambe and Wise's famous "Bring Me Sunshine" for the club website - and there is no doubt these are sunny days for Everton and their fans.

Martinez's regime is also based on strict discipline and he has already revealed he will fine players if he can prove they have not had eight hours' sleep at night, a rule he will find easier to enforce when he has overnight accommodation built at their training headquarters.

Everton are still outsiders for fourth as Arsenal appear to have the easier run-in, but those around the club - while never forgetting the fine work of Moyes over his 11 years - enthuse at the Martinez effect.

Former Everton midfielder and BBC Sport pundit Kevin Kilbane explained how Martinez got players to buy into the new era in pre-season.

"During pre-season he had the players coming in at night for a training session and he said the best thing about it was he had a squad of players who bought into it. He explained to them why he was doing it. He said it was all game-related so they could get time to recover, 48 hours or so, by bringing them in later.

"It is quite difficult to radically change players' habits. Players are quite single-minded and very reluctant to change but they have bought into it and it has brought success on the pitch.

"David Moyes left a great base and foundation but Roberto arrived and got players, lots of the guys who played under Moyes for a very long time, playing in a different style. That is real testimony to him."

A look at the stats suggests the plan is reaping rewards, allied to Martinez's mastery of substitutions - as when he introduced attacking trio Steven Naismith, Kevin Mirallas and Aiden McGeady in the second half of the 3-1 win at Fulham.

Martinez has sent on nine goalscoring substitutes in the league this season while Everton's strength late in games is becoming another characteristic. They have won 15 points with goals scored after 80 minutes this season and 17 in the last 20 minutes - both the highest in the Premier League. They have scored 34.7% of their league goals in the last 15 minutes.

"Everyone expects the younger managers such as Roberto Martinez and Brendan Rodgers to embrace the new ways such as sports science, match analysis, psychology and nutrition, but the one thing they really have to embrace is the new game of football and Roberto does that.

"This idea you can rule by fear is long gone because footballers have no reason to fear anything any more. They can just sit in the corner and pick up their wages then get a move.

"I would call it 'confidence management'. It is forever telling the players how good they are. It is a whole new way of managing modern-day professional footballers and Martinez is a great exponent of it."

Kilbane believes Martinez's August deadline-day signings, who came in as Marouane Fellaini left for Manchester United in a £27.5m move, made the key impact.

"I saw them a couple of times early on and even though they had lots of possession they were not much of a threat," said Kilbane. "He then brought in Romelu Lukaku, Gareth Barry and James McCarthy. They were game-changers.

"If you make three big signings it lifts everything. Barry played really well when they beat Chelsea then Lukaku made his debut as a substitute and scored the winner when they won 3-2 at West Ham.

"All of a sudden, that was the change - it said Everton were going to have possession of the ball, be patient, but also have a big threat and score goals."

Martinez's personal touch at Everton has also had its effect, with Kilbane saying: "I'm quite close with a number of staff in and around the training ground - masseurs, kit men and physios - and they genuinely don't have a bad word to say about him. You can see the warmth they have for him and he has for them."

Former Everton striker Graeme Sharp, who now works at the club, said: "He's been fantastic. He has embraced everything about Everton.

Goal scored by substitutes in Premier League this season

"One thing that struck me away from football was that he took a group of 20-odd journalists out to a Spanish restaurant in Liverpool just before Christmas. He was waiting for them and went around every one and knew all their names - he has the knack of making people feel special."

And Sharp has been impressed with how Martinez has imposed his beliefs on both experienced and young players: "He is so positive. His three substitutions at Fulham were all attackers and all contributed to the win.

"In the home derby game this season, Leighton Baines went off injured with a broken toe with Liverpool leading 2-1 and Roberto's response was to send Gerard Deulofeu on and switch his side around. It shocked a few and changed the face of the game. It ended 3-3 with Liverpool only getting a point in the last minute."

And despite uncertainty over the future of loan stars Barry, Lukaku and Deulofeu, Kilbane forecasts a bright future: "I asked Roberto this and he told me all he can do is evaluate at the end of the season but he has confidence in his chairman Bill Kenwright and the club.

"No matter what, he has the nucleus of outstanding young talent like Ross Barkley, Seamus Coleman and John Stones and the experience of Phil Jagielka, Leighton Baines, Leon Osman and Sylvain Distin."

If Martinez can mastermind a win over Arsenal on Sunday, his promise to Kenwright will come a step closer to reality.