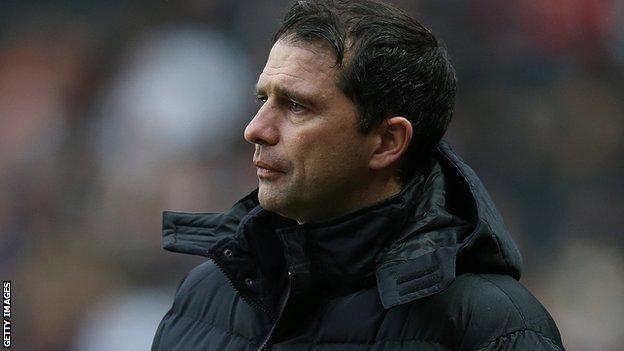 Colchester United boss Joe Dunne has warned his players their fight against relegation will influence careers.

The U's remain three points above the League One drop zone after Wednesday's 2-0 loss at Peterborough United.

"Who wants it more? It's a street fight. The gloves are off," Dunne told BBC Essex.

"There's teams in the ring and you have to be the last man standing. That's the mindset. If it means blowing a gasket, that's what it's going to take."

Colchester have now lost their last three games and have just one win in seven.

But they are 19th, three places above the bottom four, and have at least a three-point advantage on all the teams below them.

The first four of the U's next six matches are against Tranmere, Stevenage, Oldham and Crewe - who are fighting against the Essex club for survival.

"We're coming up against players and teams who stand in the way of progression," said Dunne.

"What would rather you do? Be a League One player or a League Two player?

"You're in the ring and facing somebody who is in the way of progressing in your career."