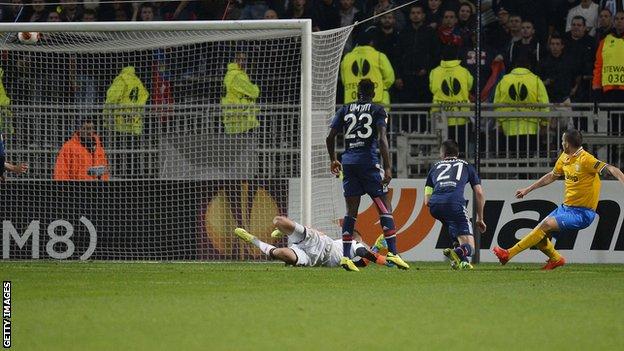 Both sides squandered several opportunities to score before Bonucci fired into the roof of the net with minutes remaining.

Elsewhere, last year's runner's up Benfica secured a vital away win as they defeated AZ Alkmaar 1-0.

Basel beat Valencia 3-0 and Porto edged Sevilla 1-0 in the other ties.

Juventus, winners of the tournament's previous incarnation the Uefa Cup on three occasions, had to work hard for their victory over a determined Lyon.

The French side had a great chance to take the lead early in the first half but former Fulham midfielder Steed Malbranque saw his drive pushed around the post by Juventus goalkeeper Gianluigi Buffon.

With much of the play contested in midfield, chances were few after that effort.

However, Carlos Tevez should have done better when the former Manchester City striker was put through one-on-one, only for goalkeeper Anthony Lopes to close down the gap and make the save.

Tevez went off with an apparent groin injury in the second half and it looked as though Juventus would have to settle for a draw as their attack lacked potency in the Argentina international's absence.

But a late scramble in the Lyon area saw Paul Pogba's shot deflect to Bonucci, who steered the ball into the net from an angle.

Portuguese side Benfica, who lost to Chelsea in the 2012-13 final, kept themselves firmly in the frame for going one better than last year after edging AZ Alkmaar of the Netherlands.

Dick Advocaat's AZ dominated the first half but fell behind soon after the restart when Eduardo Salvio fired in from the edge of the area after Oscar Cardozo's shot had been denied by Esteban.

Delgado's goals came within the space of four first-half minutes as his precise finish found the bottom corner just after the half-four mark, before he turned in Valentin Stocker's ball from close range.

Stocker then added a third in stoppage time to leave Valencia with it all to do in the return leg.

Portugal champions Porto had Fernando sent off late on after he earned two yellow cards in as many minutes.

The second-leg ties will be played on 10 April, while the final is on 14 May in Turin.