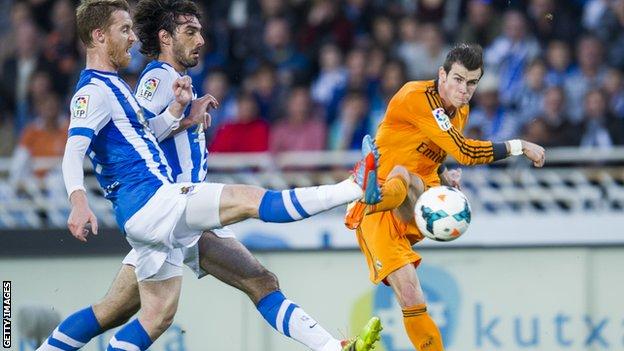 Gareth Bale doubled their lead with a spectacular long-range strike after an error by home keeper Claudio Bravo.

A clinical volley from Pepe, and Alvaro Morata's precise finish, gave the score a convincing look.

No home comfort for Sociedad

Real Madrid's victory was only the third home defeat suffered by Real Sociedad since November 2012.

Third-placed Real are three points behind leaders Atletico, who are one ahead of Barcelona with six games left.

Carlo Ancelotti's side knew their title ambitions could hinge on the visit to Sociedad after watching both Atletico and Barcelona earn narrow wins earlier on Saturday.

And, after a flat first-half display, they showed their quality after the break to earn a deserved victory.

Sixth-placed Real Sociedad outclassed defending champions Barcelona in a 3-1 win in February and were attempting to ruin the title challenge of another illustrious rival.

The Basque club started at a ferocious pace as they looked to exploit any sluggishness from a Real side that had been in midweek Champions League action.

But, despite plenty of neat approach play, they only had fleeting sights of the Madrid goal.

Portugal skipper Ronaldo missed out with a knee injury and, in his absence, Real offered little attacking threat until defensive midfielder Illarramendi put them ahead.

France striker Karim Benzema cut inside from the left and hit a fierce low drive that Sociedad keeper Bravo could only push into the path of his former team-mate.

And the late first-half goal changed the complexion of the match as a different Madrid side reappeared after the break.

Ramos headed against the crossbar before Benzema hit the same part of the woodwork with a vicious left-foot strike.

But the second goal was down to a defensive mistake rather than slick attacking play. Bravo's miscue went straight to Wales forward Bale, who superbly guided the ball back into an empty net from 25 yards.

Madrid gave the scoreline a convincing look as Pepe swept in Ramos's downward header before Morata kept his cool after latching on to a incisive throughball from Angel Di Maria.