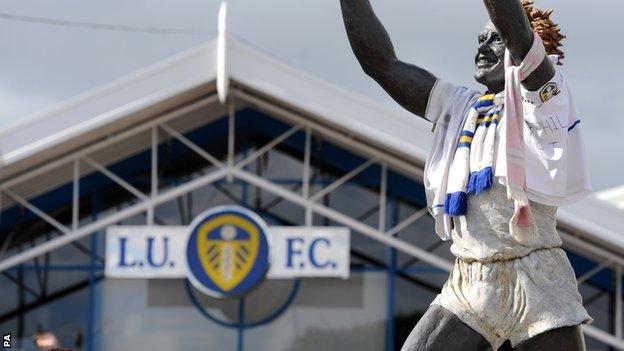 Leeds United fans have seen it all before.

They are well versed in the language of administration and insolvency, battle hardened by a multitude of broken promises and boardroom controversies during an era in which football has come second.

The latest chapter in the club's recent history is all too familiar.

The tale of a flamboyant Italian businessman, a yacht called Nelie and a battle with the authorities is another page in a story of controversy.

Massimo Cellino has launched his latest attempt to force through his takeover of the Championship club. Whatever the verdict, further appeals in the High Court and the Court of Arbitration for Sport cannot be ruled out. This may run and run.

If the Football League's decision to prevent Cellino from buying the club on the grounds that he was found guilty by an Italian court of failing to pay tax on his luxury yacht is upheld, then the future of one of England's most famous clubs will once again stand on the brink of a financial precipice.

The immediate problem will be who pays the bills. Last Friday, the squad, who agreed to defer part of their wages for March, received 50% of their monthly wage. Another 15% of that figure followed six days later.

A spokesman for the current owners, Bahraini group Gulf House Finance (GFH), confirmed to BBC Sport that the latest injection of money had come from club funds. Why then had the players not been paid 65% of their wages last week? The answer is telling.

The truth is that Leeds did not have that money last week. This is a club living hand to mouth. Two home games against Doncaster and Charlton on Saturday and Tuesday, both of which ended in Leeds defeats, have generated more money through gate receipts.

This is a scenario that has become all too familiar to those running the club in recent months. At the end of March, senior officials from the club and from GFH descended on London to decide who would pay the wages for the month.

Lawyers working for Cellino were also present. GFH asked the Italian to pay the wages for a third month in a row. He refused. The owners then told Cellino he had made a deal with them to fund the club for six months from the day he reached a takeover agreement on 31 January.

But with Cellino having pumped in some £6m of his own money, with no guarantees that he will be able to buy the club because of the Football League's stance, he refused to pour good money after bad. Once again, GFH turned down the opportunity to put money in.

In the end a source close to the talks told the BBC that Leeds had solved the immediate problem by using money set aside to pay the monthly tax bill to pay half the players' wages. The club's tax bill for March is due on 5 April.

HM Revenue & Customs will give the club 14 days to settle the balance, which is estimated to be between £500,000 and £800,000 before issuing a winding-up petition. Those who care for the club will do their all to prevent that from happening, of course. They want Leeds to rise again.

The Together Leeds consortium, headed by former Manchester United director Mike Farnan, are waiting to step in. But GFH are aware of at least one other interested party. Managing director David Haigh remains at the helm, holding the club together as it does its best to fall apart.

In December he pumped £1.5m of his own money into keeping the club running. Having been appointed by GFH, he has now cut ties and works in the hope that an owner can be found and the future secured. But the owners GFH have refused to comment on this.

There is no question the Dubai-based Bahraini bank has funds, but for now they are choosing not to invest them in Leeds. Haigh's money has paid the wages, Cellino covered the same bill in January and February, all of it helping Leeds to keep their chins above the water.

But the tide is rising quickly and the funds are drying up. Manager Brian McDermott was sacked on January's transfer deadline day and reinstated within 24 hours, the players wages have not been paid in full and yet no statement has been forthcoming and no reason has been given for why, by the owners.

Gordon Taylor, the chief executive of the Professional Footballers' Association (PFA), was the first to speak publicly about the club's failure to pay the squad in full. The owners of Leeds United said nothing.

McDermott is forced to field the barrage of questions on a weekly basis. Having been sacked on 31 January, the day Cellino thought he had taken charge, he has been battling to stay in his job ever since.

Consistently he has been left out of the loop, as crisis after crisis unfolds around him. The players are equally confused and morale is understood to be suffering as a result - perhaps it is no wonder that the club's form has plummeted with only three wins since 21 December.

When GFH bought the club from the unpopular Ken Bates in December 2012, Salem Patel, head of investment management at the company, said: "We wouldn't have bought this club if we didn't have the money in place to make this club successful. And it's as simple as that."

If only it had been that simple. For Leeds fans, this latest saga will rekindle memories of times gone by and dredge up memories many have tried hard to forget. It is more than a decade since Leeds "lived the dream" under the guidance of chief executive Peter Ridsdale.

During that era, the Elland Road club spent beyond their means in a vain attempt to usurp Manchester United as champions of England and win a European trophy. A Champions League semi-final appearance in 2001 was the high watermark. By 2004 they were in the Championship.

The club had racked up huge debts in their pursuit of glory, borrowing some £60m against future gate receipts in the hope the club would qualify for the Champions League year after year after year. The gamble failed spectacularly and the empire crumbled.

Leeds' failure to finish in the Premier League's top four in the 2001-2 season, marked the beginning of the end. The club dropped like a stone and soon it emerged that Leeds had not only been living on borrowed time, but also borrowed money.

A goldfish tank that took its place in Ridsdale's office soon became the symbol for a club living living beyond its means. The fish and their home were hired for some £200-a-year - not a huge sum of money for any business, but it was endemic of the culture at Elland Road.

Dozens and dozens of company cars were leased and little was paid for in full. When the banks came calling, the game was up and Leeds have never really recovered from that public fall from grace.

Leeds must hope the future brings with it some respite from an era that has tested their loyalty to its very limit. The support remains, however, and in vast numbers, numbers that are still the envy of some Premier League clubs. But at Leeds assets are few and far between.

The club no longer owns Elland Road, which was sold for just £8m in 2004, or their Thorp Arch training ground. But the bills continue to mount.

Cellino may provide some of the answers if he wins his appeal, or if he combines his vision with that of the Together Leeds consortium. Others may bring greater wealth and with it, the stability this football club so desperately needs. What is certain, is that Leeds deserve better.