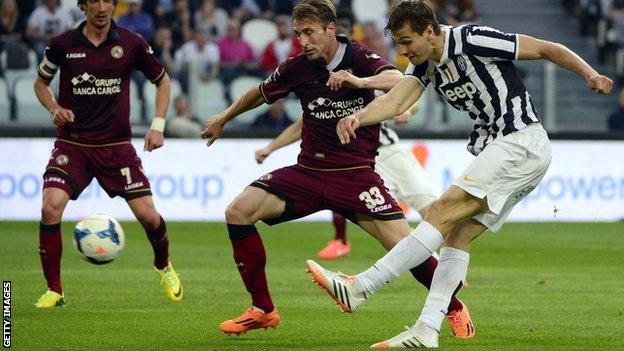 Juventus moved closer to a third straight Italian title as they regained an eight-point lead over Roma with an imperious display against Livorno.

The Spain striker added another within three minutes when he was allowed a free header from Andrea Pirlo's right-wing corner.

After the break, Livorno barely had a kick as Juve saw out an easy win.

Juventus striker Fernando Llorente has scored the most headed goals (seven) in Serie A this season.

Second-placed Roma had narrowed the gap to five points with a 3-1 win at Cagliari on Sunday, but Antonio Conte's side reasserted their control with only six games left to play.

But any tension among the home supporters in Turin quickly evaporated as their team pinned the visitors back in their own half.

Juve's dominance was reflected shortly after the half hour mark when Llorente, who arrived from Athletic Bilbao on a free transfer last summer, scored his 12th and 13th goals of the season in quick succession.

After the break, Llorente's wasted the opportunity to complete his hat-trick when he scuffed into the side-netting from Paul Pogba's pass.

He was later withdrawn to a standing ovation as Juve easily extended their Serie A record of consecutive home wins to 16 matches.