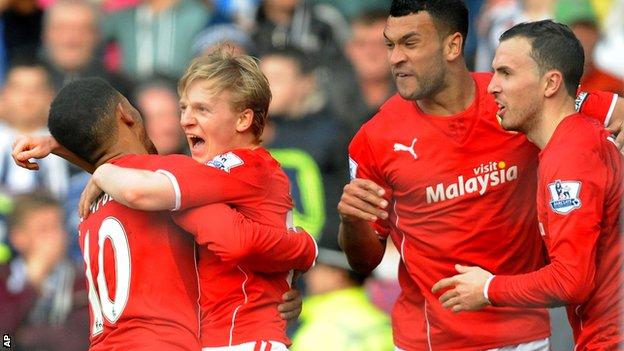 Mats Moller Daehli scored in the 95th minute to earn a crucial point.

Cardiff face Crystal Palace on Saturday, with manager Solskjaer looking to build on that dramatic recovery at The Hawthorns.

"What happened at the end of the game last week was hopefully the turning point and a defining moment," he said.

"If we'd lost that, it would have been a lot more difficult to speak to the lads."

Palace come to the Cardiff City Stadium on the back of their shock 1-0 victory over title-chasing Chelsea.

That result gave Tony Pulis's side a five-point cushion over the 18th-placed Bluebirds, who are three points behind West Brom in 17th.

With the pressure of a relegation battle mounting, Solskjaer is keeping a cool head.

"I don't think any of us should be worried," he said. "We need to take it as an opportunity to claw our way back on Palace.

"We need to go out there and give it a go and do what we can to get those three points."

The former Manchester United striker believes his players can turn the significance of the game into a positive.

"It's important we go in to the game with the right temperament, anxiety levels and excitement," added Solskjaer. "The pressure is good for players at times."

Palace's fortunes have picked up since the appointment of Welshman Pulis as manager on 23 November.

Newport-born Pulis used to watch Cardiff City when he was boy, and has a good track record of guiding teams through relegation battles.

Solskjaer is well aware of Pulis' management record, and is full of praise for the former Stoke City manager.

"As a manager you get judged on results, and he's getting results," said Solskjaer.

"You know exactly what you're going to get from Palace, and I would not be surprised if they are exactly the same as they were against Chelsea."

Cardiff City have winger Craig Noone fit again after missing three games with a groin injury. And midfielder Gary Medel is also fit after limping off against WBA last week.