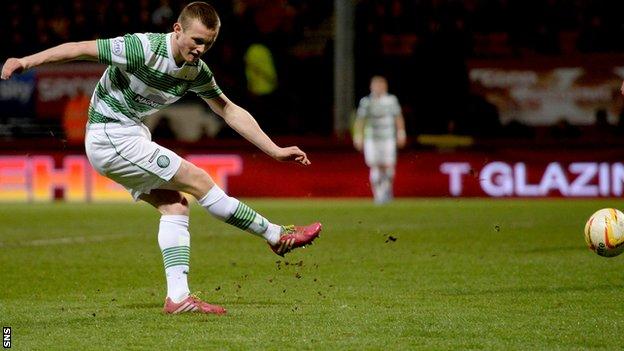 The 17-year-old made his debut in December but his next appearance was against Kilmarnock on 14 March.

He followed that with three more appearances last month.

And Henderson scored his first senior goal in a 5-1 win against Partick Thistle, the victory which secured the Scottish Premiership title for Celtic.

"It's been one of the best months of my life so far," the teenager said. "Making my first start and scoring my first goal, it couldn't really have gone any better.

"I think I've been improving all year since I've been training with the first team after we came back from Germany in pre-season.

"I'm grateful the manager has given me the opportunity and that I've been able to pay him back with a goal."

Henderson also paid tribute to Celtic captain Scott Brown for helping him find his feet in the first team.

"I'm playing with top international players and Champions League players in the first team and Scott Brown, being the captain, has kind of taken me under his wing," he added.

"Scott's been unbelievable for me. He talks to me all the time and I'm very grateful to have a player of his standard playing alongside me."

Manager Neil Lennon is delighted with Henderson's progress and doesn't expect the youngster to rest on his laurels.

"He's been absolutely excellent," Lennon said. "The challenge for Liam is to stay there. It's not just a question of coming in for two or three games and fading away again, but I don't think he's that type anyway.

"His attitude to work is fantastic and there's certainly a willingness on his part to get better. He's 17 so there's no rush and we have to make sure we guide him the right way, get the timing of everything right in terms of bringing him into the team, staying in the team or taking him out of the team."