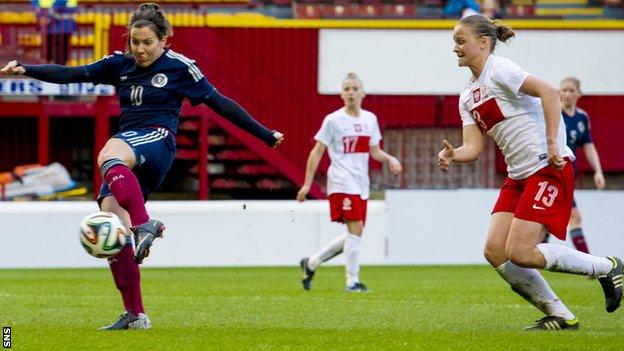 Scotland maintained a 100% record in their 2015 World Cup qualifying campaign with a hard-fought victory over a resolute Poland side.

Lisa Evans' powerful strike gave the Scots the advantage early in the second half.

And Leanne Crichton finished a fine team move to make it five wins out of five for Anna Signeul's side.

They travel to face Bosnia and Herzegovina in their next Group 4 encounter on Thursday.

For long periods, the hosts were held at bay by a Poland team much-improved from their last meeting and the visitors carved out some decent chances at Fir Park.

But the Scottish unit, high in confidence after rising to 19th in the world rankings, did enough to secure the three points.

Fielding all but one of the 11 players who defeated their opponents 4-0 in Warsaw in October, Scotland looked the sharper outfit from the off.

After some early pressure, the home team almost broke the deadlock when Jennifer Beattie hooked a diagonal ball to Leanne Ross, who tried to get a shot on target only for defender Marta Mika to deflect the ball out for a corner.

The visitors, who needed a win to stay in qualification contention, began to see more of the ball and make strides towards Gemma Fay's goal through the likes of Sofia Gonzales,

But Scotland responded and Hayley Lauder was once again at the heart of a promising move, this time threading an inch-perfect pass through for Jane Ross to cross a teasing ball but goalkeeper Anna Szymanska's parry dispelled the threat.

As the clock ticked towards half-time, both sides could have easily taken the lead. Evans came agonisingly close when she cut inside and fired in a beautifully weighted shot that looked destined for the top corner, but Szymanska diverted over with a fingertip save.

At the other end, Fay, so far a virtual spectator, was called into action when she made a brilliant one-handed stop from a low drive by Patrycja Balcerzak.

It was a case of more of the same in the second half with the game being played at a frenetic pace and the home side looking more likely to find the target.

And the home support finally had something to cheer when, after being put through by a Kim Little pass, Evans fired a venomous shot past the resilient Szymanska.

With Scotland continuing to push for a second, the Poles stood firm while almost getting a goal against the run of play when Fay was forced to tip a long-range Balcerzak effort onto the bar.

However, it was Signeul's players who put the result beyond doubt.

Little, who had been impressive throughout, twisted and turned before crossing for Lisa Evans and her headed knockdown was calmly finished by substitute Crichton.