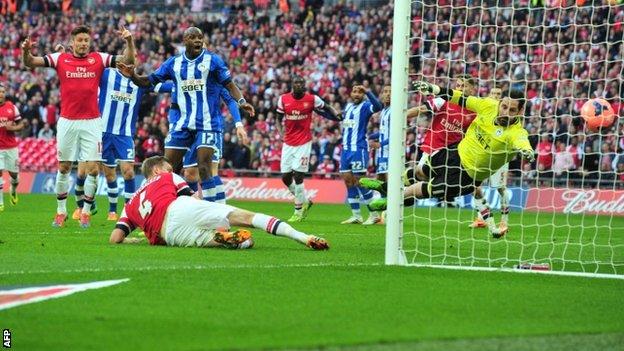 Arsenal scraped their way into the FA Cup final by beating holders Wigan on penalties to keep alive their hopes of ending a nine-year trophy drought.

Jordi Gomez's penalty put the Latics on course to reach another final, but Per Mertesacker's late equaliser maintained Arsenal's hopes of winning their first silverware since they claimed this trophy in 2005.

The teams could not be separated by extra time and, when it went to penalties, goalkeeper Lukasz Fabianski saved Wigan's first two spot-kicks, from Gary Caldwell and Jack Collison, to put Arsenal on the way to a meeting with either Hull City or Sheffield United.

Mikel Arteta, Kim Kallstrom and Olivier Giroud were all on target for Arsenal - while James McArthur and Jean Beausejour scored for Wigan - leaving Santi Cazorla to send the Gunners fans wild with celebration and relief with the decisive penalty.

Arsenal had the better of the chances before penalties, with Wigan keeper Scott Carson twice denying Yaya Sanogo, and Alex Oxlade-Chamberlain hitting the woodwork in extra time.

On a day when Everton moved ahead of Arsenal in the race for a place in next season's Champions League with victory at Sunderland, this will provide a lift in confidence for Arsene Wenger's side, despite a largely unconvincing display.

Wigan manager Uwe Rosler can be justifiably proud of his players, who can now concentrate on their main priority of winning promotion back to the Premier League.

Arsenal have won seven of their past eight penalty shootouts

Wenger stuck with his policy of replacing Wojciech Szczesny with Fabianski and playing Sanogo in attack, and the youngster almost made the crucial early breakthrough.

Carson, with nightmare memories of Wembley after his error when thrust into England's Euro 2008 qualifier against Croatia, did brilliantly to get down to Sanogo's header as he met Oxlade-Chamberlain's cross.

He also did well to race from goal to block Oxlade-Chamberlain and Sanogo again, but Wigan grew into the game and Callum McManaman, man of the match in last season's FA Cup final win against Manchester City, was emerging as a real threat to the uncertain Nacho Monreal.

Bacary Sagna had another good chance for Arsenal when Mertesacker flicked on Arteta's corner, but his finish at the far post was high and off target.

McManaman was the central figure as Wigan went ahead after 63 minutes, referee Michael Oliver having an easy decision as Mertesacker dived in recklessly in the area.

An injury to Monreal, which required his replacement by Kieran Gibbs, meant almost a four-minute delay before Gomez could take his kick, but he remained commendably cool to beat Fabianski with a perfect penalty.

Arsenal had lost both previous matches they had played at the new Wembley Stadium 2-1, to Chelsea in the 2009 FA Cup semi-final and to Birmingham in the 2011 League Cup final

Wenger needed to react but his decision to replace Lukas Podolski, rather than the struggling Sanogo, with Giroud was met with a loud chorus of jeering from the increasingly anxious Gunners fans.

Arsenal, as they had to do, finally demonstrated a greater sense of urgency, and a frantic few seconds led to the equaliser after 82 minutes.

Sagna had headed against the post and Carson had again saved superbly from Gibbs before Mertesacker arrived at the far post to score with a stooping header from Gibbs's scuffed shot.

Arsenal carried the momentum into extra time, and Carson excelled once more to turn over a fine rising shot on the turn from Sanogo.

The Gunners had gathered momentum and only the woodwork saved Wigan as Oxlade-Chamberlain's powerful shot rattled out off the angle of post and bar with Carson helpless.

Then came penalties - and the shot at a trophy Arsenal have waited for since 2005.