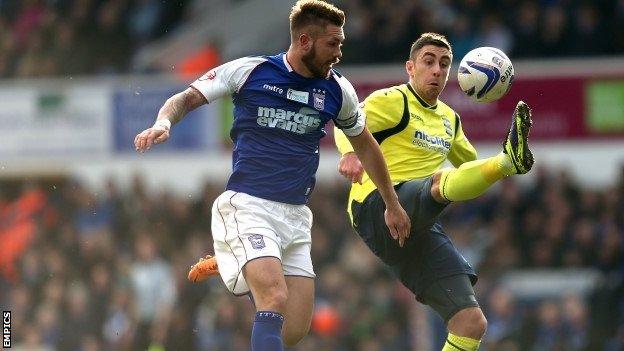 A late strike from Luke Chambers gave Ipswich victory over Doncaster and kept them on the fringes of the Championship play-off places.

Daryl Murphy's 13th of the season, a header from Tyrone Mings cross, gave Town the lead.

With eight minutes remaining, Chris Brown equalised from the spot when Mings was judged to have pushed Mark Duffy inside the area.

But, in the 86th minute, Chambers scored the winner with a fierce strike.

The win moves Ipswich into seventh place, with only Brighton's superior goal difference keeping Mick McCarthy's side out of the top six.

Doncaster remain with their heads just above water at the other end of the table, with three points separating them and Millwall, who are in 22nd place.

Left-back Mings had the first clear chance for Ipswich when his 25-yard shot tested keeper Sam Johnstone, before midfielder Stephen Hunt went even closer with a shot that drifted narrowly wide of a post.

Doncaster were far from out of it. Striker Chris Brown forced a save from Dean Gerken, who then turned a header from Gabriel Tamas around a post.

Ipswich finally broke the deadlock after the break when Mings's cross was converted by Murphy.

A largely uneventful second half seemed to be heading towards a home win when Doncaster received a lifeline out of nothing.

Mings was punished for pushing substitute Duffy with 82 minutes on the clock and Brown made no mistake from 12 yards.

But Ipswich restored their lead less than three minutes later when Jonathan Williams' shot was deflected to Chambers, who rattled the ball past Johnstone.

"If you can get in the play-offs, one team has to win. It might be a side who gets sixth and has momentum - like us, or Bournemouth or Brighton. We would all provide difficult opposition and the play-offs are such a lottery.

"People recognise the spirit in the team but we also have good players. The defence have chipped in with goals and Luke Chambers has been excellent, having played out of position all season."

"I am proud of the players and the performance they put in. We didn't just change the system once, we changed it three or four times during the game.

"After going 1-0 down, I thought the reaction to get back into the game was fantastic.

"It gives me a lot of positives going into the last four games because as an away performance that was probably one of our best today."