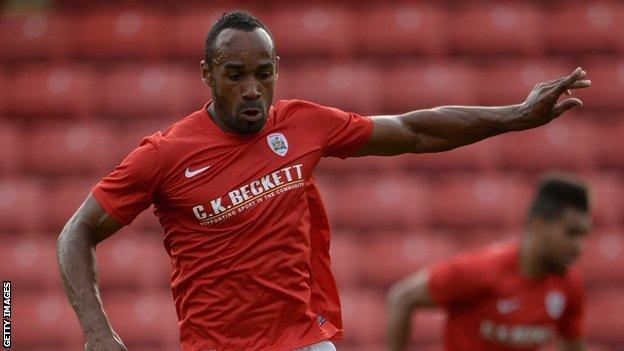 Chris O'Grady missed a late penalty as Barnsley moved closer to relegation to League One with defeat at Bolton.

Jermaine Beckford had put the hosts in front, rounding Luke Steele and tapping into an empty net.

The visitors thought they would claim a point when Ryan McLaughlin was brought down by Alex Baptiste.

But O'Grady could only hit the woodwork as Barnsley slumped to the bottom of the Championship, five points from safety with only five games left.

Bolton have now won three of their last four games, and lost just one in 12, although it has come too late to push them into play-off contention.

Beckford almost scored from Chung-Yong Lee's pass but his ninth goal of the season was not long in arriving.

Barnsley's defence got themselves in a muddle as Matt Mills launched a long punt forward, allowing Beckford the easiest of chances.

The former Everton striker spurned a similar chance after the break but Barnsley were unable to rescue themselves, O'Grady's miss condemning them to a fifth defeat in eight games.

Bolton manager Dougie Freedman: "Was I disappointed in conceding the penalty? I was very disappointed with it.

"You could sense it coming because they were throwing everything at us and we were going up the other end and if we don't finish with a goal you're going to be vulnerable on the counter attack.

"I was disappointed in giving away a penalty and they will be more disappointed with missing it but I was more concerned that we didn't finish it off at the other end."

Barnsley boss Danny Wilson: "How do I feel? I feel let down.

"I feel let down by some of the decisions that were made against us today and I feel delighted in the performance because I thought the lads did ever so well.

"I think that we deserved something out of the game and I don't just think the one point. I think we deserved to be winning the game."