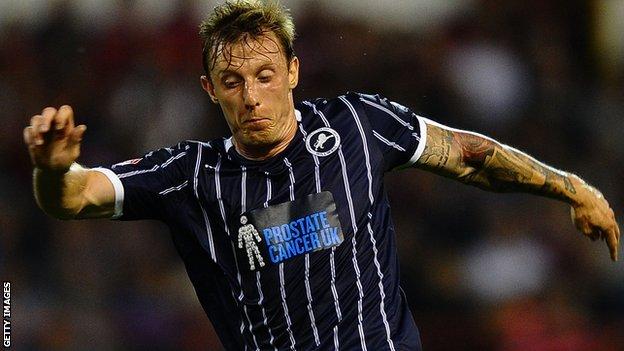 A stoppage-time goal from Martyn Woolford earned relegation-threatened Millwall a draw against Watford.

Lewis McGugan combined well with Troy Deeney before putting the visitors ahead with a 20-yard shot.

Steve Morison lashed in an equaliser from a tight angle, only for Almen Abdi's deflected shot to put Watford back in front with four minutes left.

But the Lions salvaged a draw when Woolford struck home a left-footed shot in the fifth added minute.

The result extended Millwall's unbeaten run to four games and left them just one point behind 17th-placed Charlton, who have two games in hand.

Watford, meanwhile, are seven points adrift of the play-offs with five games remaining.

Both teams were desperate for a win to help their respective end-of-season ambitions, and the game began at a frantic pace.

Watford opened the scoring when McGugan's dummy allowed Deeney to back-heel the ball back into the path of the midfielder, who shot past David Forde for his 10th goal of the season.

Watford could have doubled their lead moments later, but Forde was out quickly to block Deeney's close-range effort.

Millwall responded well and got their reward when second-half substitute Morison volleyed home from the angle following Woolford's corner.

Nicky Bailey then forced Watford keeper Manuel Almunia into a fingertip save with a 25-yard strike, before Abdi's deflected shot from the edge of the area put the visitors back in front.

But Millwall were not done, and Woolford capped a spell of late pressure with a deserved equaliser.

"I thought it was going to be one of those days," he said. "It looked like it was over, but I'm really chuffed with that result.

"It looked like 'good night' at 2-1, but the great thing about this club is that they keep fighting and I hope the fans can be as proud of the players as I am.

"If we can put a sequence together, we've got a chance. I need a strong set of players and I think we're growing. If you have got that mental capacity, you'll never surprise. Let's hope it's not too late."

"It was a tough game to come and play in. Millwall need points so it was always going to be tough, but we should have scored more in the first half when we were on top.

"What is disappointing is when you score so late yourselves and then don't go on to win the game.